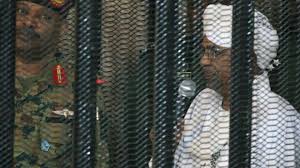 The new administration in Sudan has given its first major indication that it could hand over former President Omar al Bashir to the International Criminal Court to face crimes against humanity charges.


Sudanese Minister for Justice Nasreen Abdulbari said Bashir’s fate was first in the hands of the country’s Judiciary who will have to decide a number of corruption cases he is facing.

Bashir is currently held at the Kobar Maximum Security prison where he was moved to a few months from a private detention at an undisclosed place after he was deposed in a military coup five months protest.


In an interview on the sidelines of the United Nations (UN) 42nd Human Rights Conference at its headquarters in Geneva, Switzerland, Abdul Bari said they were signatories to the convention and it was therefore possible they could hand him over.

The Justice Minister said that Prime Minister Hamdok, would give direction on the matter soon.


The International Criminal Court (ICC) had accused Bashir of organising war crimes and crimes against humanity in the western region of Darfur, where thousands of people were killed by the Janjaweed militia alleged to be supported by his regime.

Despite an international arrest warrant issued by the ICC, Bashir went ahead to rule the country for 14 years after he won consecutive elections in 2010 and 2015.


The ICC gave out an arrest warrant that led to an international travel ban.

Before being toppled from government, Bashir’s closes allies had begun the campaign to have him run a third term against Sudan’s constitution that confined a president to serve for only two terms.


“We will also go for those who gave orders for the killing of the protesters; we want to build a country that follows the rule of law, said Abdulbari.