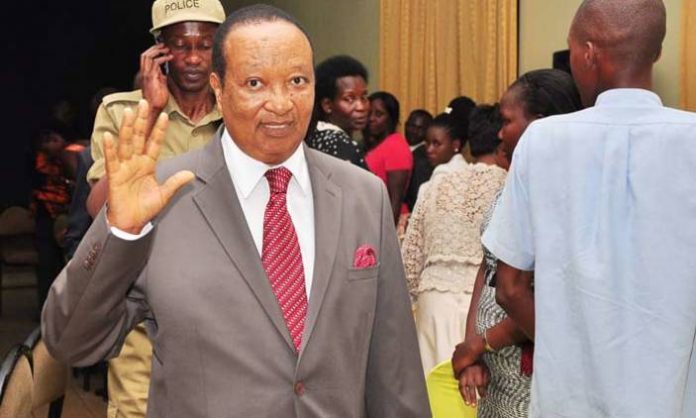 When people talk of how great Apolo Nsibambi has been as a Prime Minister, it all has to start with the man who raised him, his father Semyoni Nsibambi.


Actually in truth by Apolo becoming a Prime Minister he was simply stepping into the shoes his father, who no doubt would have ended up as Prime Minister, too, of Buganda, for one, except for unique circumstances in his life
The Nsibambi had in all 12 children. The irony is that the two eldest, are the only ones surviving.
While at Budo, Apolo followed into his father’s footsteps as Head Prefect.
Prefects at Budo have historically sided with administration, and some are known to have taken their jobs seriously, exacting stiff punishments, including caning, on their fellow students.

Now as Head Prefect Apolo was the exception. While Head Prefect there were disturbances among students caused by an incident where one of theirs had been unfairly sanctioned.
Although initially he tried to moderate the tense standoff between staff and student temperatures rose. Ultimately other than side with school administration as a Head Prefect was expected Apolo looked at the merits of the case and chose to throw in his weight behind the students.
The Headmaster, Timothy Cobbs, struck by such a young man of high principles, had to expel him to bring the school back to stability but only after much hesitation.


In any case Apolo made it clear that he no longer wished to remain as Head Prefect because of a breakdown of trust. Mr Cobb would later confess telling Apolo as he left, “I know you will one day be an important person!”
Apolo eventually made it to Makerere University from where he read a degree in Economics. After he enrolled in the University of Chicago.
Armed with a Master’s degree in Political Science Apolo joined one of the most prodigious Departments at Makerere. The Department of political science was led by Professor Ali Mazrui.
After Idi Amin took over power and Mazrui’s life became threatened along with other intellectuals he fled. Apolo was one of those few highly educated Ugandans who stuck behind, living low as a mad man went on rampage, causing, among many of his victims, the disappearance of then Vice Chancellor Frank Kalimuzo.


Apolo eventually become Head of the Department of Political Science, Dean of Faculty of Social Science and finally Executive Director of Makerere Institute of Social Research before joining government as a minister of Public Service in 1996.
We must pause here and ask why and how Makerere could not have spotted the leadership skills of Nsibambi that quickly became evident the moment he joined government.
Was it because Apolo had chosen to take a back seat as his country fell apart and concentrate on his scholarship, attaining at some point a doctorate from University of Nairobi. Or was there something then in the later charged politics of Uganda’s oldest academic institution of higher learning that often characterized him as a Muganda conservative thinker.


In the 1980s, Prof Nsibambi along with Prof Dan Mudoola, Prof Akiki Mukabi, they stood often alone as defenders of free enterprise and neo liberalism. It came as no surprise that he was passed for Deputy Vice Chancellor which went to his colleague from the University of Chicago, Prof Ginnyera- Pinchwa.
It was long after he had established himself on the national scene that Makerere made him its first non-head of state Chancellor.
A family man, Apolo, had married Rhoda Kayanja, the daughter of a veterinarian, who incidentally had also been Prefect at Gayaza High School. It was a happy marriage that gave birth to four amazing daughters, Rhoda, Lydia, Eseza and Juliet, till Rhoda suddenly passed away in 2001.


Men who lose their wives late in life can sometime make a fatal decision by remarrying only to regret terribly. When Apolo found Esther and married her in 2003 he was spared of that old age grief.
The two became a close-knit couple.
Nsibambi’s political journey was not smooth and his legacy as the longest serving prime minister ( 1999-2011) will be intensely debated in years to come by historians.
As a member of the 1994 Constituent Assembly and coming from a landed conservative Baganda family Nsibambi was expected to toy the Mengo government line, but later went against it.
Apolo was an integrationist, who strongly believed in a United Uganda with her over 40 tribes and did not share much enthusiasm for pure federalism.


His belief was that Buganda to survive she had to adopt and embrace modern values much like the Chrysanthemum monarchy of Japan that has survived for over 2000 years.
He felt strongly about this and when the Mengo government after initially agreeing to this path of giving the Baganda limited autonomy, decided later to forsake it, he resigned as a Mengo Minister of constitutional affairs, on principle.
By all means this must not have been an easy decision. In 1966 when the government of Prime Minister Milton Obote routed then President Mutesa II out of his palace, Mutesa took shelter in the very home of Eva and Semyoni.
It goes without saying that the Nsibambi were therefore monarchist and to find a son of that house going against Mengo government needs explanation.


The fact here is that as a son of an evangelist Apolo had grown up intermixing with members of different ethnic groups, another of the bright features of the revival brethren.
Their homes were always a beehive of activity of visitors from Uganda’s diverse ethnicities. “During our upbringing, we interfaced with people of different tribes..” Apolo later wrote.
Joins government
Once Apolo publicly deferred with Mengo. He was such a catch that the suave President Museveni could not miss.
Once in government almost immediately his leadership skills surfaced, ensuring timely payments of public servants, which had been lagging. In a place where leaders of government expect those whom they serve to wait on them this Minister startled many by keeping time.


As a leader of government business Prime Minister Nsibambi was often put in the unenviable positions of presenting and defending unpopular government policies.
When Apolo sent a gift to the Buganda government for repair of Kasubi tombs where four Baganda Kings are buried after a fire it was promptly returned.
With many of Apolo’s friends growing increasingly nervous with a government that was veering away from its original vision of fighting sectarianism, threatened larger entities like Buganda, leading once to Kayunga riots that almost brought down the NRM government, his enthusiasm began to wane. In 2011 Professor Nsibambi retired from government.
Out of government Professor Nsibambi kept tight lip on what he thought of the NRM government he had served so long and the direction it was taking.


We once agreed on an interview where I could have got a personal account but it failed. The last time when we were about to meet his health had started to take on a bad turn.
Although some felt his condition could be tamed in an overseas hospital, I got to learn he had decided against taking him outside for treatment. He didn’t want to trouble the state he had given much of his life any more trouble and bore his last days stoically, nursed by Esther.


In retirement Professor Nsibambi became a UN expert on governance, wrote a book on “National Integration” and played the piano in his quiet moments. He also started taking stock of his life.
On May 29th 2019 Professor Apolo Robin Nsibambi breathed his last here on earth and left to rejoin with his mother Eva, his father Semyoni, whose life was all about showing people the way to heaven.


He now at last rejoices together with them and his gone siblings in eternity.