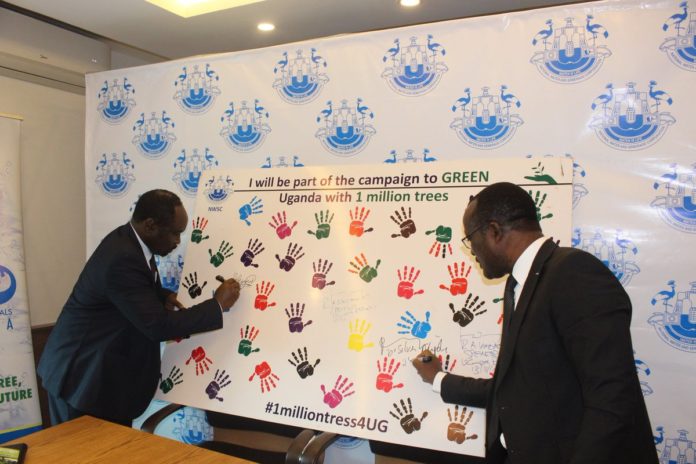 The National water and Sewerage Corporation has partnered with National Forestry Authority to plant 1 million trees in all its areas of operation in Uganda by June 2019.


Speaking at the press conference held at the new NWSC Head office in Nakasero, NFA acting ED Mr Paul Buyerah Musamali appreciated the partnership and pledged the authority’s support and technical assistance towards the campaign.
NWSC MD Dr.Eng Silver urged the people of Uganda to be part of environmental protection initiatives.

“In recent months, NWSC has experienced extreme weather conditions in Gulu, Masaka, Mbale, Arua, Mityana, Bushenyi, Mbarara among many other areas. The water sources dried up and in some areas the water treatment plants flooded. These are some of effects of climate change. Water is nolonger an infinite resource! We shall face a lot of hardships in the near future if we don’t take of the environment.” he warned.


NWSC will plant live fences around all its offices, plant trees to protect the catchment, plants trees with communities in all its areas of operation, through the Young water professionals a group of youth below the age of 35 years in the water and sanitation sector, the School Water and Sanitation clubs and the local leadership in the various areas. A total of 172,192 trees have been planted since the launch of the campaign in November 2017. The corporation is on target to achieve the campaign targets.


According to Dr. Silver, NWSC is piloting technology to produce briquettes from treated sludge . (Biofuel). This will provide alternative fuel and reduce over reliance on firewood for cooking.