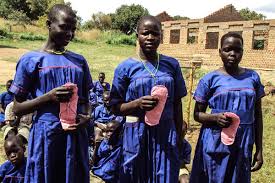 The Minister of Education and Sports, Hon Janet Kataaha Museveni has expressed regrets that the presidential pledge to supply sanitary pads to primary schools may not materialise in the near future saying, ‘such a project requires huge amounts of funds for it to cover the entire country and be sustained’.


“To supply sanitary towels across the country and sustain it, there must be a national project that is well funded that can sustain it, that is why it has not happened” said Mrs Museveni.

Kataaha Museveni said that although there are different schools of thought proposing re-usable pads on account of their affordability, she does not approve of government subjecting the young girls to re-usable pads.


The Education Minister said she was comfortable with delays in project implementation until she was sure of a secure source of funding.

“Even if it takes some time, it is better we find an investment that will start this project and sustain it then we can start supplying sanitary pads” she added.

The First Lady made this revelation while appearing before the Committee on Education and Sports to present the Ministry’s budget framework paper for 2020/2021.


Mrs Museveni said the Ministry is struggling with a range of unfunded priorities because of constraints in resources. She was apologetic that her Ministry won’t be able to heed to the public outcry to increase staffing and salaries in public universities and secondary schools 2020/2021.


The members of the committee requested the Ministry to harmonise the salaries in the sector.
The chairperson the Committee, hon Jacob Opolot Richards said that the poor pay of health instructors which is below the salary scale of health workers has discouraged health workers from joining education institutions.


“Tutors of health workers up to now earn less that the people they train; as a result, they are not willing to join training institutions, ” said Opolot

Otuke County MP, Hon Julius Acon said that without increased staffing, the plans to construct more schools as proposed the in 2020/2021 budget framework may not materialise.