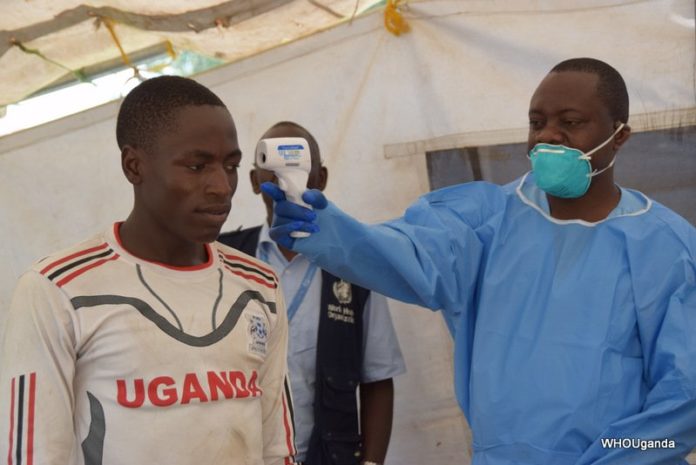 The Ministry of Health and World Health Organization has denied media reports of Ebola outbreak in western Uganda.
The ministry revealed on Wednesday evening that ‘ ‘Two samples received from Kabale Regional Referral Hospital today at the Uganda Virus Institute for two suspect VHF cases have both tested negative for Ebola , Marburg, CCHF , RVF and Sosuga Viruses.’’


In a tweet, the World Health Organazation Uganda said ‘ ‘ We refer to @XHNews story on Ebola in Uganda. We would like to clarify that there is no confirmed case of Ebola in Uganda. There are alerts due to the heightened surveillance, which are investigated as they are detected. And we will continue to get them.’’
On Wednesday, Quoting World Health Organization (WHO), Xinhua reported that three suspected cases of Ebola had been registered in the western Uganda’s Kasese district.

The WHO in a statement on Tuesday said two of the suspected cases are from neighboring eastern Democratic Republic of the Congo (DRC), where the viral hemorrhagic fever has already broken out, leaving 41 people dead.
The third was a pregnant woman who died at a hospital.
The global heath body said samples from the suspected cases have been taken to the Uganda Virus Research Institute (UVRI) for laboratory tests.


“Two of the alert cases from DRC are alive. They were identified at the Mpondwe screening point with temperatures above 37.9 and 38.8 respectively, the latter also had a headache,” said the statement.
WHO said the third alert case involved a pregnant woman who died at Kaganda hospital due to ante-partum haemorrhage.
“Use of theater where the patient was operated stopped until it is properly disinfected and the body has been retained in Kaganda hospital pending arrangements for safe burial,” said the statement.


The Ebola virus is highly contagious and can cause a range of symptoms including fever, vomiting, diarrhea, generalized pain and in many cases internal and external bleeding.
Mortality rates of Ebola fever, according to WHO, are high, with the human case-fatality rate ranging from 50 percent to 89 percent, depending on viral sub-type.