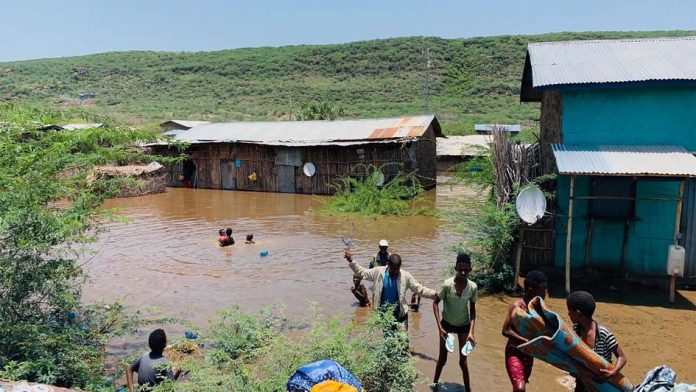 Almost a million people across East Africa will be supported by new UK funding in response to one of the worst droughts in the region for decades and unprecedented flooding; Somalia, Kenya, Ethiopia and South Sudan will be aided by a £17 million support package from the UK; funding announced by Minister for Africa Vicky Ford while she is in Kenya as part of a three-country East Africa visit.
Minister for Africa Vicky Ford announced a £17 million package of UK support to countries in East Africa affected by extreme drought and flooding.


Ford made the announcement while on a three-country visit to East Africa, starting in Kenya. The package will provide vital assistance to almost a million people in Somalia, Kenya and Ethiopia who are facing the worst drought in decades, and in South Sudan who are suffering widespread flooding for a third consecutive year.
Extreme weather events associated with climate change are worsening pre-existing drought and flood cycles and ruining harvests. Poor governance and ongoing conflicts in Somalia, South Sudan and Ethiopia are exacerbating the impact of these events by displacing vulnerable communities, destroying livelihoods and limiting access to humanitarian assistance.
Minister for Africa Vicky Ford said: For countries in East Africa, climate change is not a future problem – it is driving a humanitarian emergency right now. Catastrophic droughts and floods, paired with ongoing conflicts and poor governance in Somalia, South Sudan and Ethiopia, are creating a perfect storm in East Africa which risks pushing hundreds of thousands of people into famine.


The UK’s commitment to supporting our partners in East Africa is unwavering and we know that early action now can prevent mass loss of life. This funding package will provide vital assistance to almost a million people across the region, helping those affected to access clean water and healthy food.
The UK is moving quickly to provide support as experience has shown that early, preventative action is vital to avoiding mass loss of life.
In Somalia, approximately half the population require life-saving aid due to the ongoing drought. Drought on a similar scale in 2011 led to 260,000 deaths. In Kenya the number of people in dire need of food has risen to almost 3 million.
More than 6.4 million people are estimated to require food assistance this year in drought-affected regions of Ethiopia. In South Sudan, extreme flooding paired with ongoing violence has affected 835,000 people, including by pushing more than 350,000 people from their homes.
The funding is expected to support almost 500,000 people in Somalia to access clean water and afford food supplies, as well as providing 100,000 people in South Sudan and 26,000 children in Kenya with a combination of food assistance, water and hygiene supplies.
The UK prioritised supporting communities affected by extreme weather events such as droughts as host of COP26 in Glasgow. As part of the historic agreement reached at the summit, wealthy nations committed to double the overall climate finance available for adaptation programmes.

The UK also announced the ‘Room to Run’ guarantee with the African Development Bank, expected to unlock up to $1 billion worth of new financing for projects which will help countries adapt to the impacts of climate change.
The UK is a long-standing supporter of Africa’s adaptation to climate change, with around half of the UK’s £2.7 billion adaptation budget between 2016 and 2020 spent in Africa.
Background:
The breakdown of today’s funding announcement is below:
• Somalia – £8 million for water and cash-based support to help improve health and food security conditions, and limit displacement linked to worsening drought conditions.
• South Sudan – £3 million for food assistance and hygiene supplies to 100,000 people who are exposed to water-borne diseases and severe nutritional challenges because of protracted flooding
• Kenya – £1 million for urgent, life-saving nutritional assistance to 26,000 children in those areas worst impacted by drought.


• Ethiopia – £5 million to provide nutrition assistance to over 200,000 children and pregnant and lactating women in drought affected regions of Southern and Eastern Ethiopia.