Home Business ‘‘Nearly all banks we closed failed because of outright fraud by shareholders’’-... 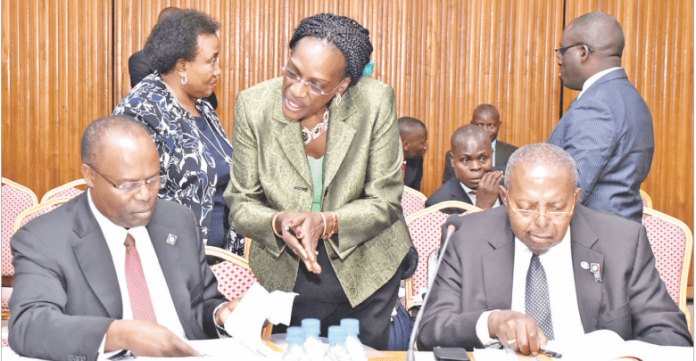 Permit me to speak about the recent parliamentary proceedings related to our execution of the bank supervision and regulatory role.


One issue that featured quite extensively in the discussions with COSASE and in the media related to the speed of resolution of some of the financial institutions and the recommendations by some sections of the public to introduce strict procedural guidelines with fixed timelines for the Bank of Uganda.
I wish to draw your attention to a regulator’s perspective on that issue.
The Bank of Uganda only intervenes in a financial institution when it has reasonable belief and evidence that continued operations of that institution pose serious risk of loss to depositors’ funds.

Moreover, the dire condition of any institution that is the subject of a Central bank intervention is a result of failure of the management, shareholders and Board of directors to execute their responsibilities as per the set laws, ethical and corporate governance procedures.
For instance, nearly all the banks closed or sold in Uganda since the turn of the century failed because of outright fraud by shareholders, excessive lending of funds to insiders – managers and shareholders, collusion to cover up irregularities between board of directors and the management, and misreporting of the true state of the bank’s financial position, among many factors.


Therefore, speed is of the essence to preserve the residual assets of any failing bank so as to fully cover the deposit liabilities.
Otherwise, any delay in intervention and resolution, is an opportunity to shareholders and management of these commercial banks that have caused their collapse in the first place, to further strip these institutions of the remaining residual assets and value; thereby shifting the burden of paying the depositors funds to the tax payers.
I wish to urge some level of caution to those advocating for bureaucratic and static procedural guidelines in the resolution of financial institutions. While there is some merit in the proposal, such procedural guidelines should recognise the dynamic nature of banking crises; allow flexibility and the need to not curtail the ability of the regulator to proactively respond to an evolving state of a failing institution and the predatory behaviour of a bank’s managers and shareholders.


Overall, the current supervision and resolution framework may not be perfect but it has served this country well, especially in the period after the enactment of the Financial Institutions Act, 2004.
The primary objective of bank regulation is to protect depositor’s funds and no depositor has lost any money in the resolution of any commercial bank since 2004.
Finally, I have been reliably informed that counterfeiting of currency is quite prevalent in Eastern Uganda [ Jinja]. Counterfeiters are simply robbers of people’s hard earned monetary value and should be dealt with firmly.
Indeed, the Bank of Uganda in the proposed amendments to the Bank of Uganda Act has included tougher penalties and sanctions as a means to deter this vice.


However, the population also has a responsibility of acquainting themselves with the security features of our currency, through the various public awareness “Know your money” campaigns carried out by the Bank of Uganda. For business units that deal with relatively high volumes of cash, they should consider buying the necessary detection gadgets.