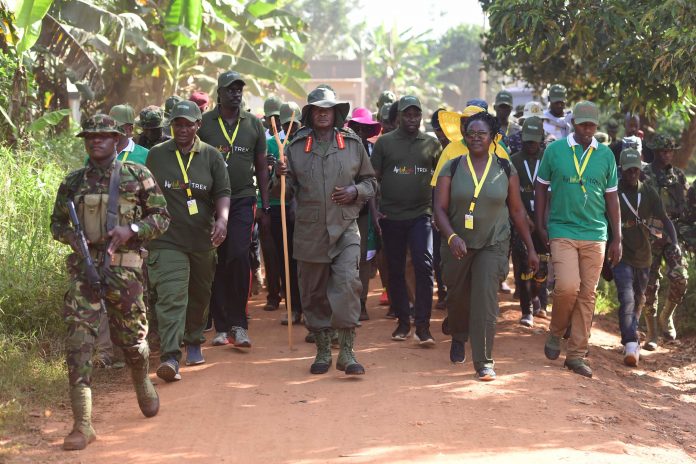 
Mr. Museveni is retracing the route he and his forces took in 1986, when they seized power.
Speaking at the commencement of the trek, the president said: This trek helps to relive the moments during the liberation struggle that ushered in the National Resistance Movement.A time for me as well to re-engage with families, individuals and communities that massively contributed to the peace of this nation.

He added: Through this trek, we celebrate and acknowledge the selfless show of bravery, pan Africanism, and sacrifice of our fellow Ugandans who delivered us peace.
Bobi Wine speaks out
Critics have dismissed the march as a stunt ahead of Uganda’s elections next year, when Mr Museveni 75, one of Africa’s longest serving presidents is expected to seek a sixth term in office.


He is facing a challenge from former pop star Bobi Wine, who portrays himself as a champion of the poor.
Mr Wine – whose real name is Robert Kyagulanyi – told AFP that the president’s walk was “wasteful”.
“My advice is, rather than spending taxpayers’ money on such trips, Museveni should know time is up for him to leave power,” Mr Wine said. “The time for hoodwinking peasants has passed him.”


Opposition MP Asuman Basalirwa also called the march a “campaigning tool”.
“Ugandans deserve better than a president walking through a jungle,” he said.
“Time spent should be used for other important issues affecting the country, especially how he plans to hand over power.”