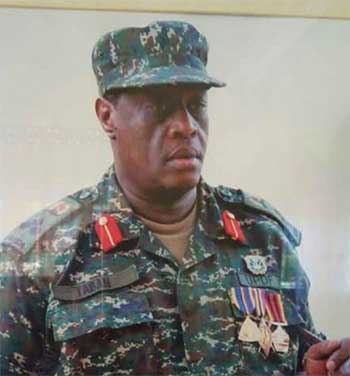 Veteran UPDF officer, Brig Geoffrey Kyabihenda RO/00094, popularly known as Taban succumbed to cancer on Monday morning at Nakasero hospital in Kampala.
‘‘Very sad to hear about the passing of our comrade Brigadier Taban Kyabihende. We shall miss his dedication and energy! May he rest in eternal Peace’’ tweeted Major General Muhoozi Kainerugaba

He was among the first 100 NRA soldiers to be recruited. Kyabihnde was also among Museveni’s first seven bodyguards under late Fred Rwigyema. Others included late Capt. Marious Katungi, Maj. Gen. Pecos Kutesa (Army Member of Parliament), late captains Aziz Bey and Kasasaira.
At the time of his death, he was Uganda’s defense attaché at the Ugandan embassy in Kinshasa, Democratic Republic of Congo.


READ: Museveni: I have never fallen sick for 31 years
Toughest battle
In an interview with the Daily Monitor in 2004, the late narrated how February 1983 battle almost ended his life.
‘ ‘The toughest battle was at Bukalabi in Luweero district in February 1983. We lost nine comrades and the enemy fire could not allow us remove their bodies from the battle ground. RPG shrapnels dug deep into my head and injured me in the arm. I bled profusely and was becoming weak. I thought I was going to die before we completed the struggle. I was taken on a bicycle to our clinic in the bush and treated.’’ He said.


He added: It is in this battle that General [Salim] Saleh was shot. It was a bad day for us. Saleh was our role model; a gallant fighter and courageous, but he was among those injured.


Another deadly incident was along the Kampala-Gulu highway on the October 9,1983. We landed into an ambush near Katugo and retreated. Our OBs (Observation Posts) were captured and were used to track us deep in the bush. The enemy had also taken one of our platoon commanders, Kanonya. He was later used by the UPC government to follow us.
Asked whether he had any regrets for fighting Bush war 1980-85, he said: I have no regrets for having participated in the struggle. We went to the bush to fight bad leadership and now Ugandans are enjoying democracy.