Home Lifestyle Museveni’s addresses: Uninspiring & predictable, yet irresistible and appealing not to miss 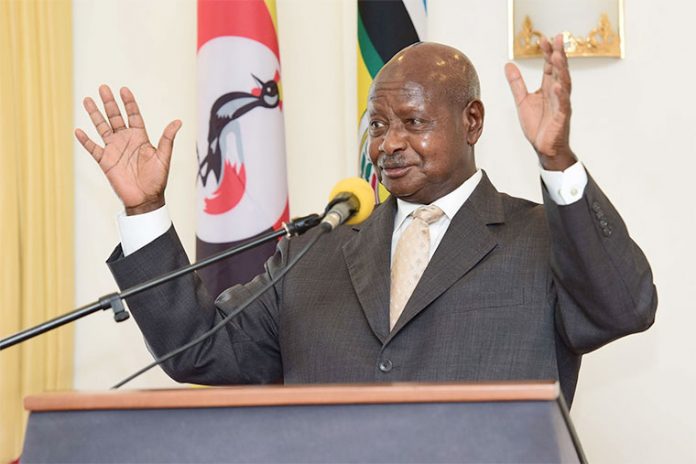 As the clock chimed 8:00 pm Monday night, Ugandans shuffled forward in their sitting room seats just an inch. Eyes locked to the screen and ears set on radio. So as he briefed the nation about critical threats the country is grappling with, he smuggled another story he knew would electrify his audience.

The story had nothing to do with an economic stimulus package or easing of the quarantine lockdown measures. It had to do with his convoy knocking a he-goat that was going about it’s business in the outskirts of Bweyogerere and Mukono
As might be expected, memes and photos of goat and it’s herders started trickling in, popping up in our whatsapp inboxes like popcorns, dripping in our social media feeds even before the President had finished his address. The owner of the goat was the following day captured on TV receiving a handsome compensation of 800,000 uganda shillings for rearing a goat that is so shrewd and smart to cushion it’s owner at the most critical time of the lockdown.


If you want to be transferred from your house to police or prison cell where you can be guaranteed of daily supply of government posho and beans, you can as well dangle a conspiracy theory here by speculating that the goat owner was stage managed and the accident was a stunt to milk political capital.
Unlike other Presidents who address their nations with scripted speeches, Museveni makes his addresses off head, long and natural dotted and decorated with runyankore and Luganda quips meandering haphazardly on almost on every subject losing the plot most times.


For the armchair viewer, or low grade observer like me, you could as well say that’s alacklustre style of communication from a head of state. However, it appears it’s always intended and designed that way and it’s Museveni’s biggest weapon: the unspoken gift of hooking his audience with many rib cracking jokes which turn supposedly long boring speeches into fodder for social media frenzy. They arrest frightening times, become soothing and therapeutic deflecting attention from his disastrous COVID-19 interventions.
We talk about politicians who create a magnetic appeal to their audience. Generally, such politicians are usually possessed with outrageous natural oratory gifts. And Museveni isn’t one of them. He is always not that articulate speaker and he stammers most of the times. However, he transfixes us for subtly strange reasons. He breathes humour into his speeches and instantly generates hapiness with breathtaking flair: crafts and moulds them around his captivating persona.


In any moment, he could litter his speech with a distinguised joke, sip his tea delightedly on his mug, microwave his famous “Okwetsyamura” and “okushoreeza” precautionary measures, roll his bulging eyes dramatically like they are being squeezed out of his skull as he imitates twenie twente phony accent of his Bazukulu, and issue a cinquain of Runyankore allegory and folk tales, or any combination of the above making him appealing character amidst his most agonizingly predictable diatribe.
After three decades in power, ironically, Museveni’s is largely known by a sizeable section of the public for his charming attributes than his benevolent dictatorial tendencies. Even when such perceptions are legitimate and not, charm and allure in a rather interesting way, have always been part of his armoury and remain his greatest attributes to hook his audience that has suffered a terrible hangover.


He launches a vicious tirade against those not taking ministry of health guidelines very seriously in a rather comic way. Asked why he wasn’t allowing truck drivers coming from Kenya to be held at an isolation centre as they await their results instead of continuing their journeys where they can easily mingle with others thus spread the stubborn pathogen. He had to say this against people misbehaving during this COVID-19 period, “God has a lot of work, He has the whole world to look after. He cannot just be here in Uganda looking after idiots” a joke that sent his audience into uncontrollable laughter.


At times Museveni must be a nightmare to politically compete with: witness his skittish anecdotes, his recent redefinition of attempted murder. But even as he attracts and occasionally court the ire of his sworn critics, there’s something weirdly impressive about him: the untamed zest of a guy prepared to turn every challenge onto an opportunity to propel his ambition and interests.
In times like these where we don’t have the luxury of alternatives on our TV screens, Museveni’s addresses which have monopolised mainstream media nicknamed “Keeping up with the Kagutas” offer something rarer, more intangible and somehow therapeutic value. Uninspiring and predictable to watch yet irresistible and appealing not to miss.


Perhaps am straying into vapid obsession with Museveni: Some of you might start accusing me of using his persona to whitewash the failings of his inept government. But the truth of the matter is that he is sort of politician who is chest-beatingly charming, bewitchingly humourous and intrinsically appealing: He is just essentially hardwired to make difficult times like these more interesting without hiring a seasoned marketeer or PR guru.

read: Why Museveni loves his AK47