Home Politics Museveni: Young Africans should learn how they can take over from others... 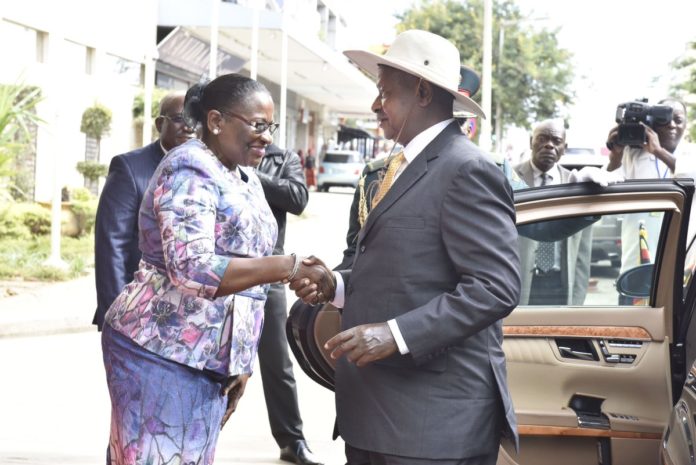 
Museveni said that FRELIMO greatly helped Uganda build a national liberation army that dismantled tribal and sectarian based post-independence armies including the defeat of tyrants.
‘ ‘ FRELIMO’s support was not in vain. The UPDF, the current army borne out of the NRA, has contained and defeated Al-Shabaab, helping restore order in Somalia, among other national and regional accomplishments.’’ The President, who is on a three day State Visit to Mozambique made the remarks at banquet hosted in his honour by his counterpart President Jacinto Nyusi at State House in the Mozambican capital of Maputo this evening.

Museveni revealed that the UPDF has not only liberated and guaranteed the security of Uganda but has also made a significant contribution to regional stability including defeating Somalia’s terrorists group Al-Shabaab.

He added: With Africa now fully liberated, today’s generation of new leaders should be preoccupied with how to develop the continent especially ridding the population of poverty.


‘‘You are a good example and I would like other young generations of Africans to learn from your example on how they can take over from others and manage their societies better.’’ He said.
On the second day of my state visit to Mozambique, president Museveni visited the Heroes Memorial Square in Maputo where he paid tribute to fallen FRELIMO heroes, including founding President Eduardo Chivambo Mondlane and his successor Samora Machel.


The president also paid tribute to Nyerere for his support for Uganda and Africa’s liberation
‘‘Nyerere’s foresightedness drove him to openly support FRELIMO and also backed Ugandan fighters to train in Mozambique so as to fight the Idi Amin dictatorship. We must also thank Mwalimu Julius Nyerere, who was part of the positive post-independence leaders that stood for patriotism and Pan-Africanism, as opposed to politics of tribe and religion.’’ He said.