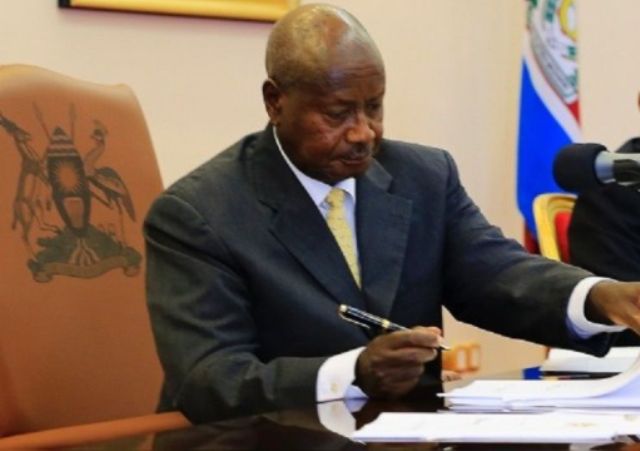 President Museveni in the letter dated March 10, 2019, addressed to his counterpart, Paul Kagame opened up on what can be termed as deteriorating relations with Rwanda.


In the letter published in government Newspaper, The New Vision, Museveni President, denied claims by Rwanda government that Uganda is supporting forces opposed to Kagame’s government
In a letter Mr. Museveni explains to Kagame about his meeting with Charlotte Mukankusi, a member of the Rwanda National Congress


The head of state said he only recently came into contact with a lady Charlotte Mukankusi, who admitted to being a member of the Rwanda National Congress (RNC), an organisation that Kagame has said is hostile to Rwanda.

Museveni in the letter writes: “Mukankusi told me that he husband Rutagarama had been killed by the agents of the Rwanda state…that she had been told by those very people [who killed her husband]. I then asked her what she wanted me to do about it because it was an internal matter. She told me she wanted me to know bad things that were happening in Rwanda. She told me she had joined RNC to resit Your Excellency’s government. She wanted us to support them.”
Museveni’s reply comes two weeks after Kagame to a retreat of Rwanda leaders that Uganda had been provoked him to take certain actions including closing part of the Gatuna border.


President Museveni’s full letter as published in the New Vision

Your Excellency Paul Kagame,
Greetings from the people of Uganda and from myself. I am writing to let you know that by accident, I, at last, had a meeting with a Rwandan who admitted to being a member of the group you told me about — Rwanda National Congress (RNC). This is a lady known as Mukankusi, whom, I am sure you know, but I had never met before.
One of my National Resistance Movement (NRM) contacts kept telling me that there was a Rwandan lady who had some important information to give me and that she wanted to come with somebody known as Gasana, who also had important information.


When I heard of Gasana, I thought that it was the Gasana who was behind me at Ntare and who, for a long time, had worked in the foreign affairs ministry of Uganda. When they came a few days ago, I discovered that Gasana was a completely different person. I think I had seen this gentleman once when the delegation of the Security Council had visited Uganda some years ago.
I then asked them what they wanted to tell me. Mukankusi told me that her husband, Rutagarama, had been killed by the agents of the Rwanda State. She mentioned Nziiza, Munyuza, etc. How had she confirmed this? That she had been told by those very people. I then asked her what she wanted me to do about it because this is an internal matter of Rwanda.
She said she wanted me to know bad things that were happening in Rwanda. She further told me that she had joined the RNC to resist Your Excellency’s Government and she wanted us to support them.


I told her that we could not support them because what was happening in Rwanda was an internal matter of Rwanda. I explained to her that the stand of the African Union is a scientific one and it is correct. Interfering in the internal affairs of sister countries is wrong because, first of all, outsiders cannot understand situations of sister countries well.
They can make mistakes. Secondly, those mutual interferences in one another’s internal affairs will interfere with the bigger normal, non-controversial, State to State activities — trade, transport, etc.
It is, therefore, correct to only concentrate on bilateral or multilateral issues and never involve oneself in the internal affairs of other countries. She was disappointed with my reply and I told her that I will inform you in writing.


Gasana, on the other hand, said that he was not involved with the RNC, but that he came to help a white lady, Wolfson, who we had declared persona-non-grata, to come back and continue with her charity work.
Some of our (people in the) diaspora had worked on it with him. He told me that he works with the Jewish Agency and, apparently, they are the ones who support Wolfson.
Mr. Rujugiro also came, separately. He seems to be resisting the idea of selling his businesses, which he had accepted (to do) before. He countered the idea of giving money to Kayumba by saying that even if he sells the factories in Uganda, he still has more lucrative factories in Angola, DR Congo, etc., a total of eight of them. He can send money from those.


He denied sending money to Kayumba or being a politician. He said that he had only supported RPF at the late Rwigyema’s request and your request.
If, therefore, he is still a problem to Rwanda, the correct option is to use the Courts of Uganda to prove the case of terrorism and then his assets can be frozen. You did not respond to my letter of October 15, 2018, which contained that proposal.
All these people left Uganda after only a few days. This was to inform you of these encounters. As I told you when we met, there is no question of Uganda supporting anti-Rwanda elements.


Indeed, I have not heard Rwanda saying that Uganda “supports” these elements. What I heard and what you told me when we met was that some of these elements were “operating” from or “in’’ Uganda to recruit, etc. It is this aspect that the joint teams should work on.


I invited Ambassador Mugambagye and I linked him with our people and the Minister of Foreign Affairs. This is easy to follow up. What is wrong is for Rwanda agents to try to operate behind the Government of Uganda. I get a lot of stories; but I will never raise them unless I have confirmed them.
Yoweri Kaguta Museveni President of the Republic of Uganda March 10, 2019