Home Politics Museveni ‘‘While Christians go to Rome, Muslims to Mecca, I go to... 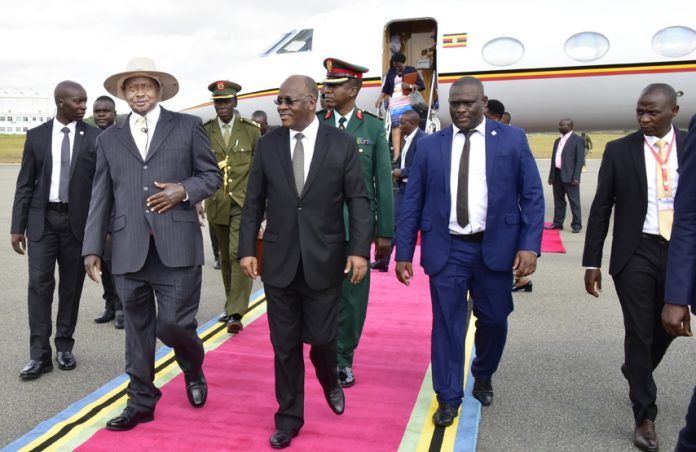 After the quadripartite summit in Angola, President Yoweri Museveni on saturday passed by Tanzania for a visit to HE John Pombe Magufuli at his country home in Chato District, Geita Region.
Museveni said his private visit to Tanzania amounted to making “a political pilgrimage” to the country that played a major role in the African liberation movement.


‘‘While Christians go to Rome, Muslims to Mecca, I come to Tanzania as my pilgrimage.’’ President Museveni Museveni said in his address – watch video below.
“Tanzania has left an indelible mark in the African liberation struggle. It is a Mecca of the liberation movement in Africa,” said Museveni.

After the liberation struggle, said the Ugandan leader, the focus now among African countries, and particularly East African countries, should be joint economic development.
He commended President Magufuli for undertaking major projects, including construction of the standard gauge railway and the Chato airport, saying these projects were aimed at stimulating economy in the region.


On his part, Tanzanian President John Magufuli said plans were afoot to improve transportation in Lake Victoria shared by Tanzania, Uganda and Kenya to facilitate trade in the region.
“The government is assembling one vessel and repairing five others to improve transportation in the lake and subsequently stimulating economic activities,” Magufuli said


Magufuli said in an address broadcast live by state-owned Tanzania Broadcasting Corporation that after assembling of the ship and repairing of five others people in the three countries will be able to improve trade, xinhuanet reported.
He called for improved trade between Tanzania and Uganda, saying trade volume between the two countries improved to 359 billion Tanzanian shillings (about 156 million U.S. dollars) in 2018 from 178 billion shillings in 2015.