Home Business Museveni: When you look at Africa-China trade figures, YOU GET STRONG RAYS... 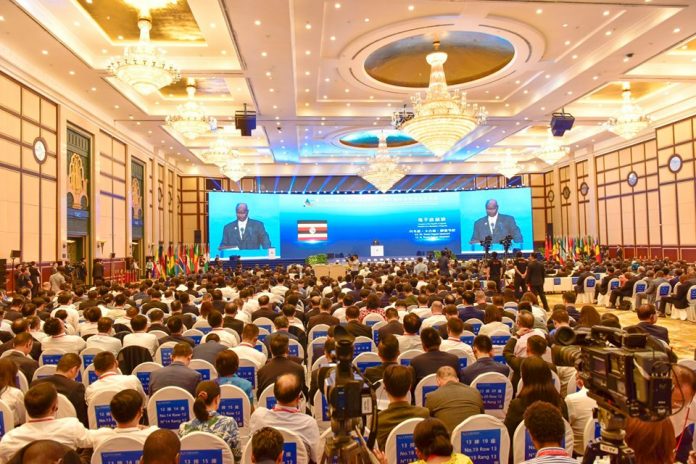 
Pressident Museveni Speech at the opening of the China-Africa economic & trade expo. Hunan,China

I salute you all to this gathering where we are, yet again, discussing how to continue building stronger ties between Africa and the Peoples’ Republic of China. Under the auspices of the Forum for China-Africa Cooperation (FOCAC), China has been working on strengthening ties with Africa. During the 2018 Beijing Summit and the 7th Ministerial Conference on FOCAC, China put forward eight major initiatives which were agreeable to Africa and these are:
• Industrial promotion;
• Infrastructure connectivity;
• Trade facilitation;
• Green development;
• Capacity building;
• Health care;
• People-to-people exchange;
• Peace and security.


Under the Industrial promotion initiative, it was agreed that China would open a China-Africa Economic and Trade Expo to be held in the Peoples’ Republic of China. I am glad that today, we are here opening the first China-Africa Trade Expo in Changsha, Hunan Province of China. I am also happy to note that Uganda was chosen to be the Guest Country of Honour at this first Expo. I thank His Excellency Xi Jinping for this very friendly gesture.
The participation of African countries, standing at at-least 53 countries and approximately 1,500 foreign guests, demonstrates the seriousness with which we, from the African continent, hold our relations with the Peoples’ Republic of China.


Africa-China relations date back to the mid-1950s with the first Asia-Africa Conference, the Bandung Conference, under the auspices of the Non-Aligned Movement. Egypt was the first African country to establish diplomatic relations with China in 1956 but by the end of the 1970s, 44 of the 50 independent African States had entered diplomatic relations with China. During this period, China also sent ten thousand engineers, doctors and technicians to provide assistance for African development and undertook various infrastructure projects, notably the 1,860-kilometer long Tanzania-Zambia railway. Therefore, China’s involvement in the development of inter-country infrastructure in Africa is not new; and it would not be difficult for us to scale it up for accelerated Africas development.
This first China-Africa Trade Expo could not have been held at a better time than now – when we have a shared vision for the prosperity of our peoples. We all appreciate that industrial development and free trade amongst ourselves will foster faster growth for our mutual benefit.


The First China Africa Economic and Trade Expo has been organized by the Ministry of Commerce of China and the Peoples’ Government of Hunan Province in order to implement part of the eight initiatives proposed at the Beijing summit on the Forum on China-Africa Cooperation Framework held in September, 2018.
Karl Marx, in 1848, pointed out that Society had gone through 5 social systems: primitive communalism, the slave state, feudalism, capitalism and socialism. The first three were old systems that were irrational and under-utilized or misused the factors of production: land (natural resources), labour, capital and entrepreneurship.
It was, initially, capitalism that, for instance, distilled the importance of specialization and exchange as efficient techniques of producing wealth and creating jobs. Adam Smith pointed out that specialization made the producer more efficient than the primitive man that tried to be a jack of all trades and a master of none. Additionally, capitalism also distilled the importance of profit as a measure of appropriate reward for human effort. Comparing profit margins guided an entrepreneur as to which enterprise he should go for. Profit itself meant that maximum care had to be taken to minimize costs.


Moreover, mass production of products also spread the fixed costs over a big quantity, thereby, making the product cheaper and, therefore, more competitive but yet still profitable. Both capitalism and socialism understood these points: specialization, exchange and profitability. Socialism, however, added the element of central planning to ameliorate the possible anarchy of a myriad of micro-economic actors only pursuing private profitability without regard to macro-economic factors.
The anarchy of micro-economic actors without a glance at the macro-economic framework, caused the disequilibrium of 1929 that led to the depression of the 1930s in the capitalist system. That crisis showed the economists the potential crisis when a disequilibrium develops between excessive products without commensurate demand.
Hence, the importance of both domestic demand in each country and the wisdom of promoting and not impeding equitable international trade. Domestic demand was boosted by the West European countries introducing welfare programmes that would give free money to out-of-jobs citizens so that they could, at least, buy what is produced. Maynard Keynes pointed out that it is even better if an unemployed person was made to dig a hole and, then, fill it again but be paid for that futile “job” for, at least, it would lubricate the system by boosting the purchasing power of the society.


Equitable trade is, therefore, a sine qua non for global prosperity. Enhancing the purchasing power of all the global citizens is, therefore, a must for those who understand what will create greater trade potential and, therefore, prosperity for more people.
When China was transitioning from poverty to “moderate prosperity”, all of us benefitted. The price of steel went from US$200 to US$900 per tonne; that of copper went from US$ 538 to US$1539 per tonne; and cement prices had upward movement as well.
Therefore, without a big market, prosperity is not possible. China, indeed, tried to develop depending only on her huge internal market. She found that she was not developing at the required speed. The internal market was not enough in spite of having the biggest population at that time. She needed a huge internal market to bargain with the others in terms of reciprocation but also needed the external market to enhance faster growth.


We salute the far-sighted Chinese leaders who opened up the economy of China, since 1978, which has resulted into a meteoric rise of China to become the second biggest economy in the world; it is now a super power. With this enhanced capacity, the Chinese government and Chinese companies have not wasted time in coming to the support of Africa.
When you look at Africa-China trade figures, you get strong rays of hope despite the trade deficit that Africa still experiences vis a vis China. This Forum should, among others, enable us to devise ways of turning these rays of hope into a reality. Between 2016 and 2018, Africa’s exports to China increased from US$ 36.88billion to US$ 73.1billion and the trade deficit declined from US$40.63billion to US$20.1billion over the same period. What is more interesting is the fact that the narrowing of the trade deficit is not merely on account of declining imports (as these have grown from US$ 75.5 billion to US$94.2 billion over the same period) but rather, import substitution supported, in part, by Chinese companies. Some of the companies are being funded by the Chinese Government to establish industries in Africa. This is, therefore, not just a historical relationship of solidarity but a relationship that is mutually beneficial. We are supporting each other’s prosperity and those efforts should be intensified.
China Government has supported Africa to tackle the strategic bottleneck of infrastructure such as inter-connectivity and energy, especially for manufacturing.


Despite the seemingly impressive growth of Africa’s exports to China, the continent remains a very insignificant market player in China, accounting for 2.3%, 2.8% and 3.4% of the Chinese market share in 2016, 2017 and 2018 respectively. The more disturbing factor is that these exports from Africa are, mainly, raw materials, especially Oil and Gas and Minerals. In this, we export jobs and wealth to China. This trend must be reversed and I implore all African countries to work towards exporting processed goods. On the other hand, China’s market share in Africa stood at 17.2% in 2018. This is a wake-up call to all of us that we need to do more to enable Africa export more to China
It is intriguing to note that even though we have a nominal market share in China, the country remains a big market for Africa’s exports; absorbing 22.7%, 18.6% and 19.8% in 2016, 2017 and 2018 respectively. This implies that we are not producing enough as a continent compared to what just the Chinese market demands. Therefore, any measures aimed at increasing Africa-China trade must, as a matter of priority, equally address the production and productivity question.


Besides Expos, such as this one, which are good for showcasing the goods and services we produce to potential customers and consumers, our partnership should enable us to address the following:
A developing and developed Africa is good for itself as well as its partners such as China. As the old Chinese saying goes; “If you give a man fish, he will have a single meal. If you teach him how to fish, he will eat fish all his life”. Our Chinese friends who are more advanced than us need to continue working with us so that we learn how to fish and can thus eat fish all our life. This will be a true win-win partnership and will certainly be mutually beneficial.