Home Business Museveni wants each of the 134 districts to have a vocational sacco-... 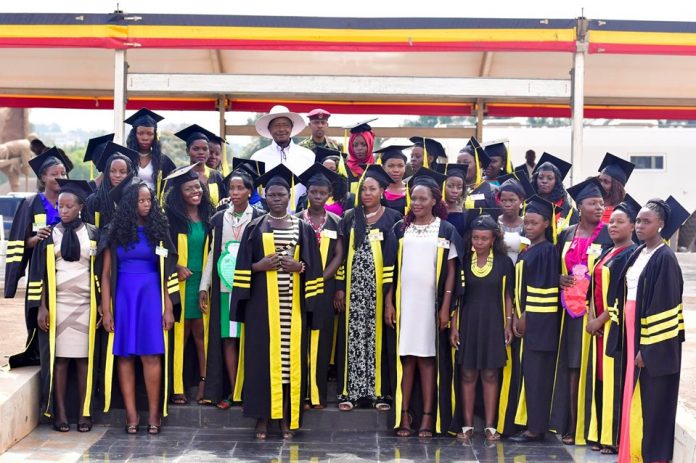 President Yoweri Museveni on Sunday officiated at a graduation ceremony of 8,480 female graduands who have been trained under the Presidential Initiative on Skilling the Girl Child.


The graduands successfully completed their training and obtained skills in bakery, hair dressing, knitting, tailoring and shoemaking.
The girl-child skilling programme is led by Lucy Nakyobe Mbonye, the State House Comptroller. Last year, the president presided over the passing out 4,000.
The girls were drawn from the areas of Kigowa, Mutundwe, Luzira, Wandegeya, Nakulabye and Katanga in Kampala District.

Speaking the ceremony, the President reiterated plans of forming Savings and Credit Cooperative Organizations of the same skill-set in various districts in the country, to enable youth borrow money to support their projects at low interest rates.
“We will be doing this in various districts and continue supporting such programmes such that we don’t take our jobs and money abroad,” – the President said.


President Museveni has intensified campaign among the youth since Bobi Wine, who has a big following among the young, declared that he would stand for president in 2021.
Mr. Museveni who has been president for over 30 years faces challenge from Kyadondo East MP Robert Kyagulanyi in 2021 presidential elections. There is a feeling among the government officials that many youths might be attracted to him
President Museveni said he wanted each vocational profession to have a sacco in each district. the head of stare said, he would then go through these sacco’s to provide money for the youths being imparted with various vocational skills.

read: Where are Uganda’s graduates?
President Museveni started giving funds to such groups in Kampala City and last month, each city division was given Shs500m to cater for the 16 groups. Some groups such as taxi operators and youth from Kamwokya were given the same amount in their savings associations.