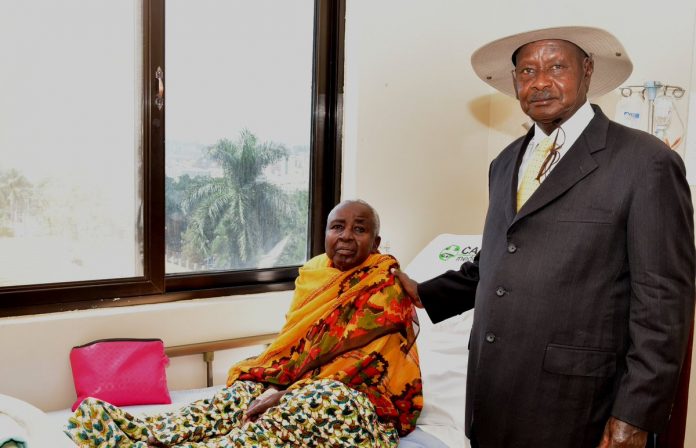 Before leaving for Ethiopia for African Union Heads of State summit on Friday, president Museveni, paid a courtesy call on the Rwenzururu Queen Mother, Christine Biira Mukirania, in hospital in Kampala, where she is admitted.
‘‘I wish her a quick recovery’’ the paid who took photo with Queen Mother posted on social media.


Ugandans on social media have praised the movement.
On November 26 and 27, 2016, security forces killed 103 people [ according to Human Rights Watch] after storming the palace of King Charles Wesley Mumbere, a tribal leader of the Bakonzo people, in Kasese, home of the Rwenzururu kingdom., in the attack that saw King Charles Wesley Mumbere and about 200 others arrested.
Mumbere was later released. However his his movements are restricted to the districts of Kampala where he currently resides, Jinja and Wakiso

Bbosa Denis West: This is what they call mending fences!

Agirembabazi Peterson : After he killed 151 people in Kasese Massacre. Imprisoning the Omusinga and the rest of the subjects, now he brings his empty head to our mum.

Agirembabazi Peterson : Tell me where I have lied. It’s true He killed them using Ecweru

Nabwiiso Samuel: Now if this Jaja God calls her will the Mumbere first ask Government to go and send away the mother guide me on this

Charles Opolot : Way to go. Magnanimity at its best

Amos Ssemalulu: Is this what he had to do for Kasese? Paying a visit when the King cannot even go to Kasese? All this can’t cover up the mess that NRM soldiers killed innocent lives without any justification


February 2018, the president also donated money to widows of the Kasese attack. The Daily Monitor reported that there are at least 120 widows, more than 200 orphans and two widowers from across the region. The money MP Delivered Bukedia woman MP Anita Among in a lump sum of Shs200m, Shs50m was specifically for the 34 widows, and the rest was for motorcycle boba boda riders and some other organised women groups in markets in Kasese Municipality.