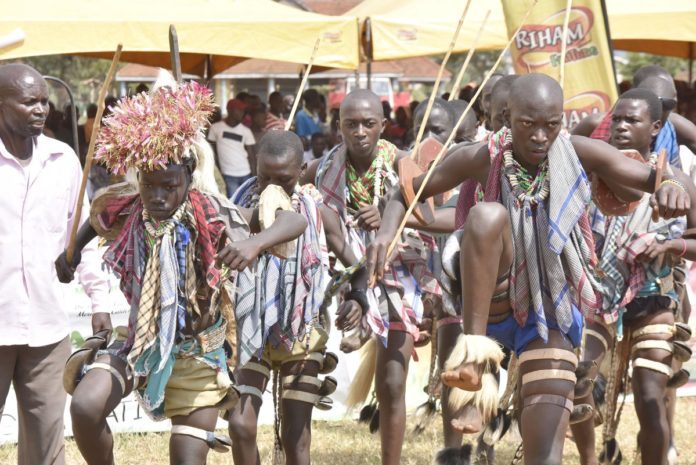 President Museveni and his Kenyan counterpart, Uhuru Kenyatta, will on August 11, grace the Bamasaba Cultural Grounds in Mutoto, Mbale for the launch of 2018 the Imbalu season.
Moses Kutoyi, the chairperson of Imbalu organising committee said the institution will use the event to commission a multi-cultural centre; which will, among other things, house a cultural village, a zoo and recreational centre.


During the ceremony over 6,000 boys will lose their foreskin as they transition into adulthood
Two years ago, the Bamasaba Cultural Institution in partnership with Uganda Tourism Board unveiled a plan to upgrade Mutoto Cultural Site to boost tourism.The board also announced that the circumcision fete had been elevated to a carnival and added to Uganda’s tourism products.
IMBALU” as it is locally referred to among the Bagisu occurs once every two years during leap years. Every male has to undergo this ritual upon reaching puberty.

The Bagisu have made Imbalu public, allowing tourists to also attend this great event of life time. The operation takes one hour in which the circumciser makes three bold cuts to remove the foreskin prior the whistle is blown to mark the event complete. The initiate raises his hands strongly, dancing, proudly showing his blooded fellow to an ululating crowd. Crying in the course of the event could denote cowardice hence forbidden.


Imbalu circumcision ceremony dates back to the story that a certain Mugisu man was summoned by the council of elders because of stealing other men’s wives and then he was subjected to circumcision as a punishment and preventive action only to yield nothing as he turned stronger and admirable to women than ever before. His colleagues retaliated by circumcising themselves so as to also remain competitive.