Home Politics Museveni: Ugandans will be earning Ugx.3.5m by 2020 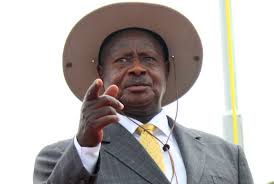 President Yoweri Museveni has said that through vision in 2020, goverment wants every Ugandan to earn at least Ugx. s3.5m annually. that is about Ugx. 300,000 per month.

The president said this will be achieved through increasing funding to agriculture that employs majority Ugandans and investing more in Operation Wealth Creation programmes. The president revealed that next year one trillion will be injected in the Operation Wealth Programme up from Ugx. 361 billion.

The celebrations were held under the theme: “Harness Ugandan’s Demographic Dividend; Invest in Teenage Girls.”

Mr Museveni said government started with investing in peace, followed by immunization, education of children, and later water, roads and electricity which, he said, are responsible for the growth

“I request people of Isingiro, and Ugandans in general, to embrace this struggle of total monetization of the economy,” he said.