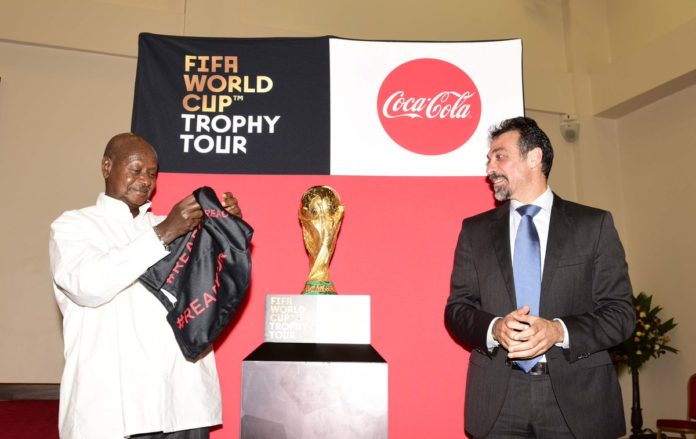 President Museveni has promised Ugandans that the National team, Uganda Cranes will win the World Cup in 2022. Government has in the recent past invested more funds in sports particularly Football.


President Museveni made the remarks while receiving the trophy at State House in Entebbe.
Mr. Museveni said that government appreciates and values sports. Adding that Uganda is now ranked 71st out of 206 countries in the FIFA rankings and with the commitment of Sports administrators, and increased Government support, ‘ ‘we shall continue to until we reach the World Cup finals’’ he said.

Mr. Museveni said that Uganda with raw football talent almost qualified for the World Cup 2018. We only lost to Egypt 1-0, which we also beat 1-0 at Mandela National Stadium. Egypt narrowly progressed to World Cup 2018. We were second with 09 points in Group E.
“It’s my pleasure to receive the trophy here in Uganda, we are a footballing nation that hopes to win this trophy, we hope to win it in a few years, probably in 2022 and also retain it.” He said while receiving the tour currently on tour of Africa.


“We are a footballing country and we hope to at one time win this Cup and retain it in Uganda. This may take a few years considering that National Teams from more developed countries train under very scientific and technologically advanced situations.’’ The president said.


Uganda was chosen amongst 10 countries in Africa to host the trophy through competitive bidding that focused on security, capacity to host among other factors. According to officials — the tour will boost Uganda’s sports tourism, and also stimulate interest for sports activities amongst Ugandans