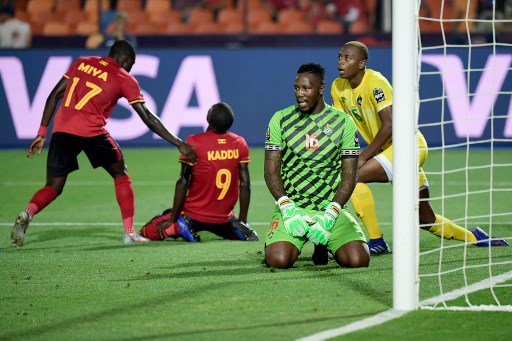 President Museveni in brief statement on Thursday said the 1:1 between Uganda Cranes and Zimbabwe national team at the AFCON2019 tournament ‘ ‘is still a positive result’’


The head of state who keenly following the performance of the national team said ‘ ‘ I am confident we can progress to the Group of 16 if the team stays focused.’’
‘ ‘ I wish Uganda Cranes all the best.’’ He said.

Patrick Kaddu wasted a glorious chance for Uganda when he blazed over from close range after Chigova palmed out a deflected cross, with Taddeo Lwanga bending just wide for the Cranes late on, which could have resulted into a win for Uganda.


Emmanuel Okwi pounced on a rebound to nudge Uganda ahead on 12 minutes in Cairo but Khama Billiat levelled for Zimbabwe with a glancing finish shortly before half-time.
Uganda edged closer towards qualification for the last 16 after moving onto four points in Group A, leaving Zimbabwe needing to beat the Democratic Republic of Congo in their final game to stand a chance of squeezing through.

read: In the end a fair result: Cranes 1: Zimbabwe 1: Uganda on the verge of the last 16