Home Lifestyle Museveni turns 75, spends the day grazing cattle at his farm in... 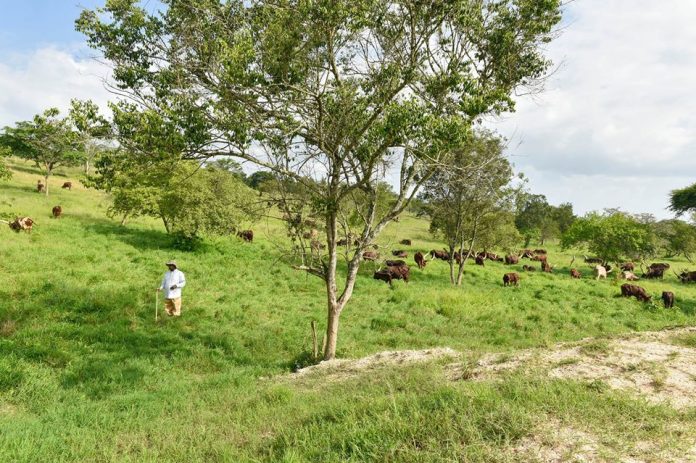 President Yoweri Museveni on Sunday turned 75.. The president spent the day at his farm in Kisozi grazing his cattle.
‘‘It has been a happy day spent at the farm in Kisozi, Gomba District, grazing my cattle.’’ The President posted on Sunday evening.


While celebrating his 73rd birthday, the president told his daughters that going by the way things are, he will hit 100 years.
Mr. Museveni made remarks while addressing the East African Law Society’s 22nd Annual Conference at Imperial Resort Beach Hotel in Entebbe, Wakiso district.

‘ ‘ I have already covered the longest distance (73 years) 27 years is like tomorrow.’’ The president said. Mr. Museveni revealed that he told his daughters that if he does hit 100 years, they will be responsible.

Mr. Museveni settled for September 15 as his birthday, after speculation and second-person accounts supported by what he calls a number of “historical and scientific” events that took place in 1944, the year when he says he was born.
Writing in the 2nd edition of Sowing the Mustard Seed, in 2016, Museveni says three people including his mother, Esteeri Kokundeka helped him find out details of his date of birth. Museveni says his mother said he was born “like three months before the ekikatu (the mass cattle vaccination) of ishara-matu (when the cattle’s ears were being notched).”


Since his mother had said it was like three months after before mass vaccination, Museveni said he first took August 1944 as the date of birth. But Museveni says there was another old woman who kept saying that she knew when he was born. When invited to Rwakitura, the old lady, Tophus Bwankuuku told Museveni another account.


“She told me that she and her husband lived in the parish next to ours; that would be a distance of eight miles away. However, her sister in law (omuramukazi) was married in the village next to ours, Ruyonjwa (two miles away or less). She had undertaken okwangama (when a woman temporarily withdraws from her husband home on account of some disagreements and goes back to her father’s or brother’s household),” Museveni says.


“When she arrived at their home in Rwenchweera, she told them that by the time she left, Kaguta’s wife had been taken to the hospital to deliver. Then after a few days, information came that Kaguta’s (Museveni’s father) wife had delivered and the month was September not August,” Museveni further recollects.

Happy birthday to Mzee wa kazi, Yoweri Museveni. May you have many more Afande Mzee. pic.twitter.com/HtWDcqZnPU

Museveni then concluded that September 15, is the most probable date of birth. Museveni was reportedly born in Mbarara hospital but he says they had no records when he crosschecked


However, the Opposition claim the president under-reported his age. In 2011, Democratic Party youth wing – Uganda Young Democrats wanted to organize a birth party for president Museveni claiming that he was born on December 4, 1937, that would make him 82 today.

Happy 75th birthday Gen. Yoweri Museveni. As you admitted in this video, your vigour has waned & you're no longer able to actively provide leadership to Uganda. We want to help you fulfill this promise you made come 2021, by peacefully retiring you!https://t.co/wdNtJeBNLD

read: Museveni: I’m still around, I going to reach 100 years

@KagutaMuseveni Your love and service for this country and Africa is admirable, so is your dedication to serve our people. May God bless the works of your hands. Happy birthday. pic.twitter.com/QYWqUDd9tm