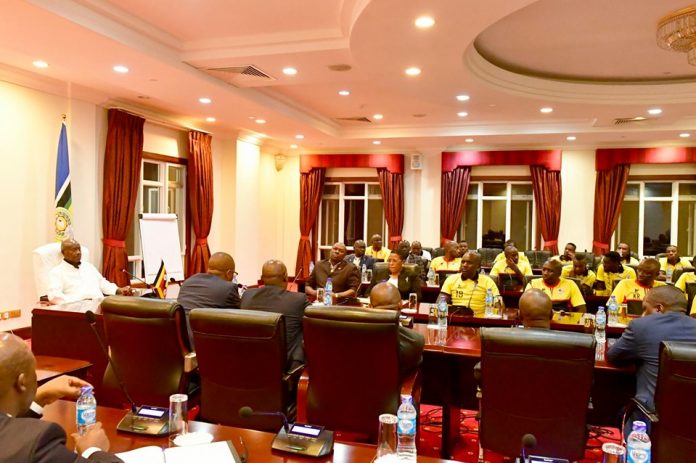 President Yoweri Museveni on Monday evening hosted the National Soccer Team- The Cranes, from Egypt where they represented ‘‘Uganda so well. Making it to the last 16 out of the 53 countries is a commendable job. ‘’ he said.


the president: I’m very happy that the Cranes went up to the last 16. I know we will perform better next time. I will organise 1m dollars with the government to distribute it among the players and officials. Of course, the officials will not get as much as the players. Although we didn’t win all our fixtures, we made a good effort and achieved some reasonable success. I don’t know how Senegal got that goal. I see our players are all fit young people. All they need is more stamina.

More support for sports sector
The president explained that when Uganda began recovering, ‘ ‘ we started sports Again. Government has not committed to supporting the national team seriously, but we have been doing it in a small way because we are dealing with other pressing issues like; security, education, health, roads, piped water, electricity, ICT.’


Mr. Museveni revealed ,this small push is already bringing very good results, when we start supporting it more, imagine what our sportsmen/women can do.
‘‘Because of their entertaining value, games bring unity. It’s not good for people to bring partisan politics in games, if you see anyone doing it, you know they are unserious. Drunkards enjoy games, thieves suspend stealing for 90 minutes. Games are good therapy for society. ‘’

He also called on sports people to prepare well so that they don’t live miserable in old age.
‘‘Our sports people from the past have not lived a good adult life. I ask the players to remain disciplined, they should avoid alcohol and womanising. ‘’