Home Politics Museveni to make triumphant entry into the city today; to drive from... 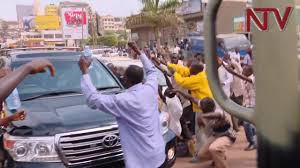 President Yoweri Museveni will today [Thursday] drive from his rural home In Rwakitura to the capital, Kampala, making various stops in major towns.
Museveni, who has ruled since 1986, was declared the winner of the January 14 poll with 59% of the vote against opposition leader Bobi Wine’s 35%, in the hotly contested polls. Wine disputed the results whose process he said was undermined by widespread illegalities- including harassment of the opposition, media and deaths of scores of Wine’s supporters.


To celebrate this victory, President Museveni will make over seven stops in his route, according to government spokesperson Ofwono Opondo.
And at 6pm, the President will meet his fans at City Square in the heart of Kampala and will interact them
The president’s victory lap comes amid calls for the government to lift a house arrest on opposition leader Robert Kyagulanyi, popularly known as Bobi Wine, who has rejected the election results.

Security forces arrested Kyagulanyi, popularly known as Bobi Wine, on November 18, 2020, in Luuka district, Eastern Uganda, ahead of a planned campaign rally. The police spokesperson, Fred Enanga, said in a statement that Kyagulanyi, the presidential candidate of the National Unity Platform, was arrested for allegedly breaching Covid-19 regulations by mobilizing large crowds for his campaign rallies

while briefing , diplomats from several foreign missions as he briefed them about the concluded polls on Wednesday, The Foreign Affairs Minister, Sam Kutesa said that in the face of the Coronavirus pandemic, Uganda government successfully ensured a favourable space for a free, fair , peaceful and inclusive process that allowed candidates to canvass support from the electorates.