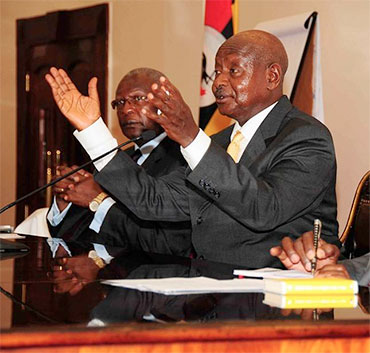 
December last year, President Museveni appointed a total of four judges, three of whom are to serve on the Supreme Court and one as Principal Judge.
‘’ I congratulate the new Justices for elevation to the highest court and salute outgoing Principal Judge Yorokamu Bamwine for a job well done. ‘’ the Head of state said on tuesday

He added: I am glad that God and history have given me an opportunity to participate in rebuilding Uganda’s Judiciary.
The president promised to share his detailed views on what the institution is doing well and areas that can be improved during the forthcoming judge’s conference
Last year, the President asked Judiciary to prioritize Business issues to prevent Uganda from bad Reputation


“Uganda’s competitive advantage should not be interrupted by slow commercial justice. Start with business issues because slow justice can give Uganda a bad reputation. Investors are setting up factories in Uganda because we have ensured security. We have got a strong Army,” he said.


The President made the call at State House, Entebbe on 10th December 2019 when he presided over the swearing in of 3 Judges of the Court of Appeal/Constitutional Court and 12 for the High Court.
The President, while congratulating them upon their achievement, reminded them to ensure the security of persons and property adding that murder and rape should be treated as serious matters.


“I congratulate the new judges upon their appointments. I represent the freedom fighters and we want a minimum package of equal rights. Secondly, I represent the elected people. We must work and we cannot accept impunity,” he added.


He asked them not to treat village thieves lightly and the judicial officials must treat them strictly because they affect the society.