Home Politics Museveni Passes Out 60 Russian-Trained UPDF Commanders: ASKS THEM TO BE... 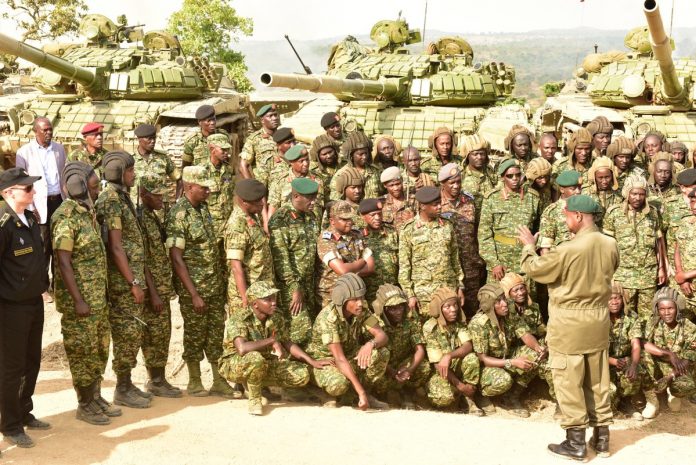 President Yoweri Museveni who is also the Commander In Chief of Uganda’s armed forces tells army commanders that in war, you don’t choose a season.


“I saw this exercise. It is very good training. However, you don’t choose the season to fight. You can’t say you will only fight in the rainy season or only during the day. You must be ready to fight day and night, 24 hours a day, seven days a week, 12 months a year.’’ He said.
He added: Today we had dust but you must also be trained to fight in the night. I want you to gain capacity to fight in all conditions. The foundation is here, the rest is refinement.


The President was speaking shortly after passing out 60 army commanders who have been undergoing an Armour Battalion Commanders Course at the Armoured Warfare Training School, Karama in Mubende district on Friday.

read: Museveni: Anyone who thinks of destabilising Uganda, will be defeated and destroyed

According to the Chief of Defense Forces, Lieutenant General David Muhoozi, the course was part of the presidential directive to continuously strengthen the UPDF. He thanked the President for his relentless support and guidance in improving the posture of the UPDF.
“While there are still gaps, we will ensure that we follow your advice to improve on our skills. The exercise today exhibits the required competence but requires continuous training,’ he said.


In his remarks, leader of the Russian experts in Uganda Colonel Du Belotserkovsky said that the training was a sign of the good technical cooperation between Russia and Uganda. “We hope that we will proceed with the cooperation and work together to strengthen the Ugandan army,” he said.