Home Politics Museveni: NRM is built on the ideology of ‘‘power of the people,... 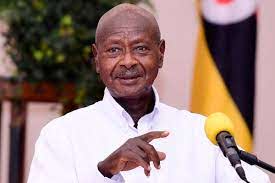 By President Yoweri Museveni
The ideology of the NRM right from the early days, is based on four principles: Patriotism – love Uganda; Pan Africanism – love Africa; Social – economic transformation – (from peasantry to middle and skilled working classes); and democracy (power of the people, by the People, for the people).
This love for Uganda (anti-sectarianism) and love for Africa (Pan-Africanism) is not a fashion or mere slogans.


It is because that is the only way we can guarantee the prosperity of each of us by creating big markets for our products. Currently we have surplus sugar, surplus milk, surplus maize, surplus bananas etc.
In some parts of Africa, they have need for these products. That is why the NRM always works for the integration of Africa – both economic and political.
Social- economic transformation is in order to create a modern Ugandan – educated and knowledgeable. That is how many of you are on the social – media, using the internet and the telephone systems the NRM put in place. You are not shouting across valleys with unaided voices, but using the systems that the NRM put in place.

Democracy is how vote for the ones you prefer

Democracy is how you are able to give your frank opinions, vote for the ones you prefer, socialize freely the way we have been doing until Covid-19 came in. Every principle of the NRM has got serious implications for the destiny of the Black and African races (nations).
Therefore, please, discuss these issues seriously and with respect so that we get correct solutions. Number one and number two mean maximum unity within Uganda and economic and political integration in Africa and number three and four are clear. These are very serious historical tasks where we need all people capable to contribute. That is how the NRM government is a multi – generational Government of grandparents, parents and grandchildren.


Uganda an island of stability

That is how Uganda has developed so much and has become an island of stability.
How would 1.4 million refugees come here if it was not for stability? That is how we have defeated the combined problems of the rising waters, the landslides, the locusts and the virus, the latter being a phenomenon that the negative group were cursing as to why we should have a lockdown when nobody has died. Well, they have recently been rewarded with ﬁve deaths from corona.
I am in leadership because my party nominated me and I accepted because I know there is work for all of us to do. The majority of the people in government are young people, but young people working with the old ones: Museveni, Moses Ali, Kivejinja, Rugunda etc yes; however, also Namuganza, Evelyn Anite, Kasolo, kibuule, Galabuzi, Tumwebaze, Kaducu, Bahati, Adoa, Kasule Lumumba etc.
It is a solid group: ideology, experience and energy of youth in a combined package. If you are not happy with this, you have your parties. Peacefully, compete for votes like the others have done: Mzee Ssemwogerere, Besigye, Mama Miria, the late Mzee Ssebaana, Mayanja Kibirige etc.


Biology vs ideology
To argue for only biology and not ideology is a disaster for the country. Actually, that is what happened at Independence, in 1962. All the leaders were young: Obote-35; Muteesa-39, Kakonge-26, Ibingira-28; Nekyon-28; etc. The only one in his 40s may have been BK Kirya or maybe Nadiope.
What happened? Disaster. Biology did not work. Idi Amin was 39, I had forgotten. 2) Why is this old man always talking about history, bush etc. etc.? Oh dear!! Why do we read the Bible? Why do we read the Quran? They are old books but with a lot of wisdom. They were also inspired by God.


Nobody can stop me
The NRM documents were not inspired by God like the Holy Books; but they capture a rich experience. Nobody can stop me from talking about the glorious history of the People of Uganda.
Some of the group accused me of singing the same song all the time. First of all, there is everything right with singing the same song for a long time. It is called consistency. As long as the problems persist, we must address them until they vanish. How long have we been ﬁghting with the problem of subsistence farming?
I started dealing with the problem of subsistence farming in 1966 in North Ankole. There, it has been partially dealt with. We broke off to ﬁght wars in 1971 and for 16years, we were away. I resumed dealing with the problem until 1995, when I got good results; I started my countrywide campaign of bonna bagagawale. Up to now, many of the communities are still Kukolera Kidda kyoonka, tic me cam keken.
Should I leave this unsolved problem and start singing Hollywood songs and watching European Clubs of football only? No, NRM sings old songs as long as they are needed and new songs as is necessary. In 1986, the song was to deal with shortages of sugar, soap, parafﬁn, textiles, beer, etc. Where are the shortages now? Instead, the song now is how to market surplus sugar, surplus electricity, surplus maize, surplus milk, surplus industrial products etc. Be serious.


Keep off our Armed Forces out of the nonsense of tribal debates
The other wrong malignment is trying to cast the NRM as a system monopolized by people from western Uganda. Since you are allergic to history, otherwise, I would have reminded you that much of my time I was in Tanzania, Mozambique etc.
How many Banyankore or Westerners were there? We fought in the Luwero Triangle. Many Ugandan groups were there: Baganda, Banyankore, Barugwaara, Baruuru, Barundi, Banyarwanda, Baruuli, Banyoro, There was an unclear picture trying to show some army people.
Kindly, leave our Armed Forces out of the nonsense of tribal debates. They have serious work to do and they have done it well. Leave them out of your confusion. The only point one can say about that is recruitment in the Armed Forces is by quotas per district. You check during the recruitment time. However, you can look at your fellow civilian ofﬁcers.


Here in the Presidency, I am quite comfortable without many Banyankore, or, indeed, any munyankore around. 1) Mitala- Unless he became a munyankore today – Head of Civil Service. ii) Katuramu- Westerner- Kabalega’s land; iii) President’s Ofﬁce – Kakande- only munyankore through enkaanda, otherwise muganda from Ddwaniro- Masuliita. IV) State House Comptroller- Nakyobe – only guilty on the nkaanda side, muganda of some place. v) PPS to the President- Omona – Originally Acholi, but somehow Kumamunized by residence. I am quite comfortable without any big munyankore in the vicinity.
Do not tell us about those cheap things of tribes and religious sectarianism. The LDUs that you are complaining about were all recruited from Kampala and Wakes. Are you trying to say that people of Wakiso and Kampala are bad because of mistakes of individuals against laid down laws, who are, moreover, punished for those mistakes?