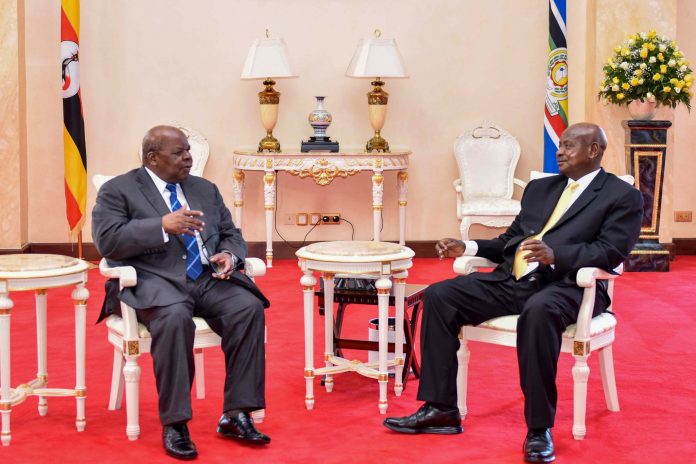 Uganda will mourn the death of Tanzania’s former President Benjamin Mkapa for three days.
President Museveni made the announcement on Friday, and directed that Ugandan flags fly at half-mast.
Mkapa died at the age of 81, served as Tanzania’s third president from 1995 to 2005.
‘’I convey my condolences and those of the People of Uganda to Anne, the children and the people of Tanzania. The flags in Uganda will fly at half-mast for three days, starting tomorrow, Saturday, July 25th, at 0600hrs ‘’ the president said


Added: When he became President of Tanzania, we worked together to consolidate the East African Community. It is a great loss for Africa. May his soul rest in eternal peace.
The head of state said he started working with the late 1967 ‘ ‘when we were university students and he was the chief editor of the Nationalist newspaper’’

President Uhuru Kenyatta eulogized Mkapa as an “outstanding East African who worked tirelessly for the integration, peace, and progress of the region.”


Mwai Kibaki, Kenya’s third president, described Mkapa as one of Africa’s most illustrious sons.
“Mkapa is a perfect portrait of public-spiritedness replete with valuable lessons for those who serve or wish to serve in the public space. A revolutionary at heart whose efforts to deregulate Tanzania’s economy marked the beginning of a new dawn in his country,” Mr Kibaki said in a statement.
“The late Mkapa — a close ally of Tanzania’s founding president Mwalimu Julius Nyerere — distinguished himself as one of the most reputable peace brokers in the region,” Mr Kibaki noted.
Opposition leader Raila Odinga mourned Mkapa as a great friend of the Kenyan people, a pan-Africanist, a true believer in South-South Cooperation, and a global statesman.


The US Embassy in Dar es Salaam in a tweet eulogised Mkapa as having tirelessly worked to ensure peace and social welfare for people from all walks of life. “His contribution will not be forgotten,” said the embassy.
UNAids Executive Director Winnie Byanyima described Mkapa as a “tireless champion for peace and an #AIDS free Africa.”