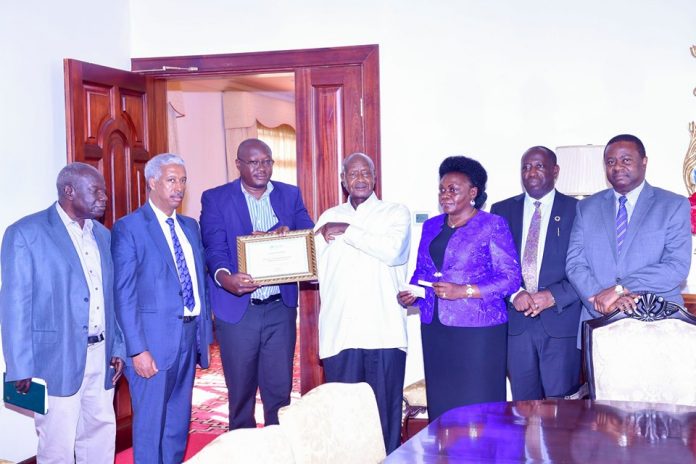 President Yoweri Museveni has congratulated Dr. Misaki Wayengera, a Researcher at Makerere University College of Health Sciences, for his efforts in developing a rapid test kit to diagnose the deadly Ebola and Marburg viruses.


“I want to congratulate our scientists for engaging in ground breaking research and producing a lot of products. The Government will fund you. It is the issue of prioritization and putting the money in the right place,” he said.

The President was speaking during a meeting at State House, Entebbe to recognize Dr. Misaki Wayengera who recently won the World Health Organization (WHO) high innovation challenge in Product Development Category that took place at the WHO Africa Regional Headquarters in Congo (Brazzaville).
President Museveni said that the Government of Uganda will support the efforts of the researchers by establishing a manufacturing facility that will enable them to put all the products together.


He commended Dr. Wayengera and his team on the achievements realized adding that the research can bring in a host of benefits to society because the products form the core that addresses many human challenges such as hemorrhage fevers and HIV afflictions that immensely affect the world.
The President observed that Uganda has, on several occasions, been attacked by epidemics, including Ebola and Marburg, resulting in the deaths of trained preventive workers and wananchi.


State Minister for Health, Hon. Sarah Ochieng Opendi, saluted Dr. Wayengera and his team for the innovation saying their efforts will go a long way in easing the diagnosis of viral hemorrhage fevers such as Ebola and Marburg.
Dr. Wayengera, on his part, thanked President Museveni for recognizing their efforts and his support. He said that the Rapid Test Kit, will eliminate all the viruses of Ebola adding that the kit easy to deploy in rural village settings where there are no laboratories and expertise.