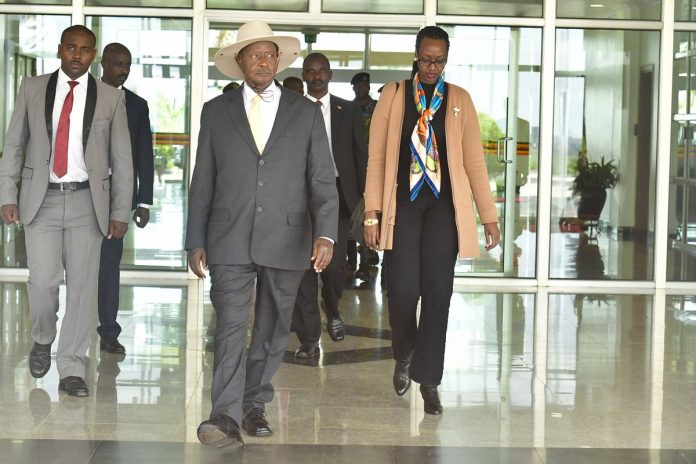 
The president, accompanied by daughter Patience were seen off at Entebbe by among others Minister for Presidency, Esther Mbayo.
The first-ever Russia-Africa summit will be held from Oct. 23-24 in Sochi, Russia.
The Kremlin has said it expects 47 African leaders to converge on the Black Sea city of Sochi for the Oct. 23-24 event, Moscow’s first Russia-Africa summit and part of an ambitious push for influence and business in Africa.

For Moscow, the prize is greater political influence on a continent with 54 United Nations member states, sprawling mineral wealth, and potentially lucrative markets for Russian-manufactured weapons. The world’s largest wheat exporter, Russia is also looking to ramp up its supplies of grain and fertiliser to meet demand that is rising in step with Africa’s booming population. –Reuters reported.


Russia plans to put on an arms fair at the summit, showing Russian-made weapons including its S-400 missile defence system, other air defence systems as well as non-military equipment, according to the Almaz-Antey arms manufacturer.

This convening is only another illustration of the recent increase in economic, security, and political-diplomatic engagements to foster Russia-Africa relations.
This renewed relationship is going to be centered around pragmatic economic cooperation, military-technical partnerships, and Russia’s quiet soft-power push. These are all set out in the competitive context with the United States, the European Union, and China, among others, as the backdrop.


The number of arms supplied by Russia keeps increasing and the Stockholm International Peace Research Institute found that Russia’s sales of weaponry to African countries in 2017 had doubled compared to 2012. China and the US fall behind Russia, which supplied 39% of Africa’s imported arms between 2017 and 2013.
Private mercenary effort is a very common form of involvement by Russia in African countries, as demonstrated by large-scale mercenary efforts in the Central African Republic, but military contractors have also been active in other African countries.


Documents were leaked in June which show Russia had been assisting Sudanese military efforts to defeat former president Omar al-Bashir.
Soft power diplomacy
And in a return to the peak of its Soviet influence days in the 1960s, education is becoming a key influence vehicle for Russia in African countries with everything from research support and scholarships to language schools and academic partnerships.


Similarly, Russia builds language centers of education in African countries and uses them to promote Russian culture and language. Scholarships are being facilitated by Russia to African students.


Russia uses a blend of hard power and soft power in order to provide a complementary yet competitive strategy for the creation of a new power bloc that would resist global forces’ influence in Africa—in particular, China and the United States.
Additional reporting Quartz Africa