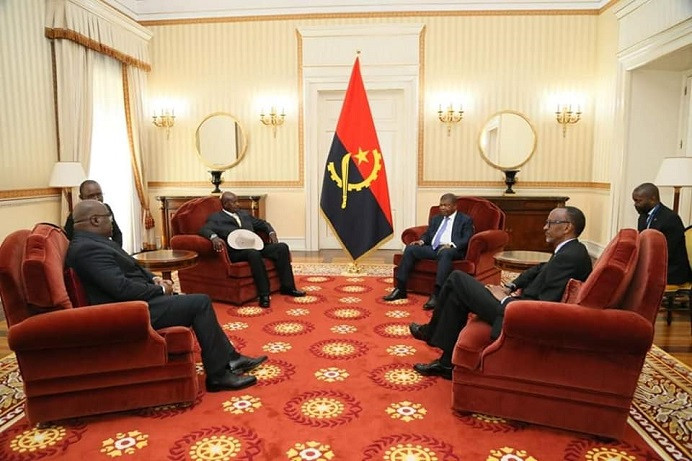 
The summit was attended by President Museveni, Rwandan counterpart Paul Kagame and DR Congo’s Félix Tshisekedi.
They issued a three-page communique after the afternoon summit . The four leaders first met alone with translators only.They then later moved into a formal public summit with foreign ministers and multitudes of aides.

A joint communiqué signed by Angolan Foreign Affairs minister Manuel Augusto indicated that the four presidents agreed to “prioritise the resolution of any dispute between their respective countries by peaceful means through conventional channels and in the Spirit of African brotherhood and solidarity.”
On the 13-point communique, the ongoing fallout between Rwanda and Uganda – which was clearly the main agenda, comes at the bottom. They affirmed that they are happy with the “peaceful climate reigning in the sub region”.


The leaders agreed to “continue dialogue” bringing together the two sides, and “welcomed the political will” that Rwanda and Uganda are exerting to solve the existing problems.
“In this regard, the Summit charged the Republic of Angola with assistance from Democratic Republic of Congo to facilitate this process,” reads point 11 of the communique, which has 13 resolutions and 3 sub resolutions.
The leaders say the summit was conducted in “a climate of fraternity and perfect harmony”. However, the only image to emerge from their closed-door quadripartite session showed a quire atmosphere as Kagame and Museveni sat directly opposite.


Kigali accuses Uganda of what it has described as “three outstanding issues”.
These have been publicly outlined by President Kagame as: support to individuals and groups including RNC of Kayumba Nyamwasa and “P5″─ groups focused on fighting the Rwandan government; arresting, torturing and deporting Rwandans as well as economic sabotage.
Uganda has denied the claims.