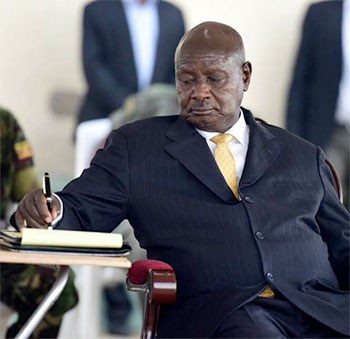 President Museveni has directed the Minister of Energy, and the Inspector General of Government (IGG) to investigate Umeme Concession and resultant high tariffs that Ugandans are still paying for electricity despite the claims by Umeme limited that they have invested more than $ 500m.


For long, Ugandans have complained about high yaka prices. Using the Q4, 2016 period, Umeme bought a kilowatt hour or a unit of electricity at Shs. 260.9/= and sold it to you on your yaka meter Shs.800/= for a domestic consumer (This figure excludes 18% VAT). This big margin between buying and selling price
Umeme also charges customers for connection poles, cables and even transformers but lists them as its own assets and investments – for which the consumer tariff is then hiked to sustain the guaranteed Return on Investment (ROI) . That this unreasonably raises tariffs by approximately 18%. Umeme against the provisions of the concession agreement, uses customer generated revenue to invest and earn a return on investment. And From December 2006, the electricity consumers paid all the taxes on Umeme’s profit through the following year’s tariff.

In the letter dated 12th March 2018, to the Minister Muloni, the president wrote ‘ ‘ I am writing to you in connection with Umeme concession. The concession apparently was messed up by certain elements in your ministry. It is that messing up that is responsible for high tariffs (Prices) that Ugandans are still paying for electricity’’ the president noted.
The president observes that the cheating started with fraud inflating the magnitude of the technical and commercial losses. The Auditor General had calculated technical and commercial losses, and the two categories of losses to be 28% in 2015.


‘‘ then all of the sudden, a delegation of Ugandans went to USA and mysteriously together with the investor hiked the magnitude of the technical and commercial losses at 38%. When Gen. Salim Saleh wrote his investigative report in 2009, again mysteriously the losses parachuted back to 28%, about 15% were technical losses caused by old wires, 13% were commercial losses caused by non-collection of debts by Uganda electricity Board’’


The president in letter also copied to IGG’s office, Minister of Finance, Auditor General General says that since then commercial losses have shrank to only 1% while technical losses have climbed to 17.3% yet the investors claim to have invested $500m in the distribution infrastructure.


‘ ‘ if they have invested so much money, why do the technical losses not decline?’’ the president wondered.
He adds: there is incredible provision of gueratnting the profits to the investors of 20% which again must be collected from the tarrff. The alleged investments account for 22% of the price of electricity and losses account for 26% of the price ‘ ‘ were the technical losses not supposed to have been eliminated’’? The president noted with concern.


Museveni directs
‘ ‘ Why were [ losses] not eliminated and why is the consumer being penalized for that if the investments were made, why then the losses? Why do the consumers have to pay for both mysterious investments and the mysterious losses that should have disappeared long ago?’’ the president notes.

read: President Museveni, HERE ARE THE MEN WHO HID THE BUJAGALI DEAL FROM YOU


read: Umeme; the Economic HIT-MEN bleeding the economy as the regulator ERA looks on

‘ ‘ I am directing you to furnish me with explanation on all these matters. In the meantime, there should be no question of renewing Umeme concession. Let us look for cheaper way of modernizing and expanding the transmission and distribution line. By copy of this letter, I am also requesting the IGG to look into these issues’’ the president said.