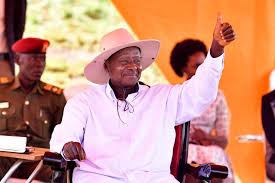 President Museveni ‘inner circle’ have already reportedly received jabs of China’s Sinopharm Covid-19 vaccine as the rest of the country wait for official delivery. An American newspaper, reported
Early this month, government of Uganda ordered 18 million doses of the COVID-19 vaccine developed by AstraZeneca and up to 40% of the shipments are expected to arrive by the end of March. The vaccine shots will be procured from the Serum Institute of India, the government said in a statement


The first doses will be used to vaccinate people aged 50 years and above, people with underlying health conditions, health workers, security personnel, teachers and other essential social service providers, the statement said.
However, The Wall Street Journal, reported last week: “Members of President Yoweri Museveni’s inner circle were offered vaccines from China state-owned drugmaker Sinopharm.”
The newspaper investigations report indicated that the practice master-minded by the Chinese government and meant to promote their vaccines has also been reported in Peru and the Philippines.

According to the Daily Monitor, Mr Don Wanyama, the senior press secretary to President Museveni, denied the allegation, saying the country is still waiting for doses of the vaccine and that when it comes, frontline workers will be prioritised.