Home Lifestyle Museveni: I talked to the police surgeon who was involved in... 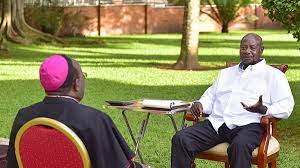 The archbishop of Kampala Dr Cyprian Kizito Lwanga was found lying lifeless in bed at his residence in Lubaga on Saturday morning and was officially pronounced dead by his personal physician at around 9:08 am.
According to the interim archdiocesan administrator Msgr. Charles Kasibante and the archdiocesan health coordinator Dr Andrew Ssekitoleko , ‘ ‘postmortem was conducted by a team of senior pathologists in presence of two family representatives and two physicians delegated by the church adding that at the end of the exercise, it was established that the archbishop had a heart attack due to a blood clot in the heart vessels.’’

When I received the news of Archbishop Lwanga's death, I called the police surgeon who was involved in his postmortem and they told me the condition was well known. I asked them if it was the case, what did they do about it when he was alive! pic.twitter.com/wArEje7yZl

Although religion gives us the comfort that when we die, it is because God has called us, I want our people to stay here as long as possible. Hence doctors should have explored all options when dealing with known conditions like the one that killed Archbishop Lwanga. pic.twitter.com/UQSCjosk3D

President Yoweri Museveni has revealed that the late Archbishop of Kampala Archdiocese Cyprian Kizito Lwanga was one of the NRA's religious sympathizers when the president led the rebellion against the day's government. #NTVNews https://t.co/CjbdidzabH

the archbishop used to provide food to the rebels

President Museveni says Archbishop Cyprian Kizito Lwanga was one of their sympathizers as his NRA rebels fought in the bush against Amin and Obote before assuming power in 1986. He says the archbishop used to provide food (matooke) to the rebels

President Museveni says Archbishop Cyprian Kizito Lwanga's personal doctors at some point in the future will have to explain and clarify to the nation how they failed to manage the prelate's health condition that led to his death yet it was manageable pic.twitter.com/DYVsBfX8Rb

🔹Archbishop Lwanga was gripped by fear of death, poison, spies. He was very picky with where & what he ate – insider