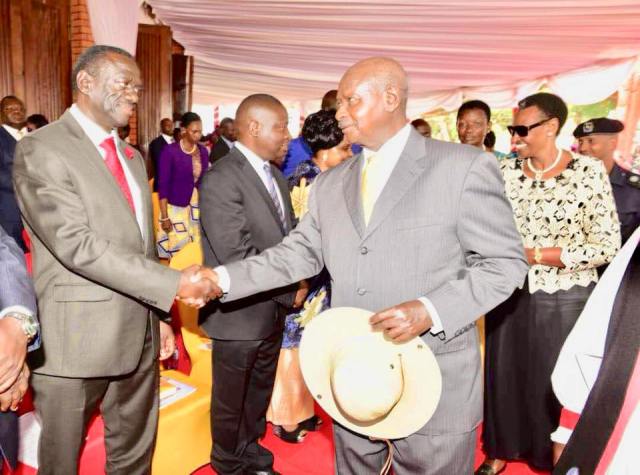 The Resistance War started on the 6th of February, 1981 and major battles ended with the capture of Kampala on the 26th of January, 1986. Within that 5 years’ War, there were four campaigns, a number of operations and many battles.

The campaigns were four: The gun-raising campaign from the 6th of February, 1981, to September, 1985, when, in addition to the 4,000 rifles we had captured from the UNLA, we received the 5,000 rifles from Mwalimu with 1,000,000 rounds of ammunition and the 800 rifles we had received from Gaddaffi, with 800,000 rounds of ammunition.
The second campaign was the campaign to open the second front in the Rwenzori Mountains, starting in March, 1985, until the battle of Rubona in June, 1985.


The third campaign was the expansion that started in September, 1985, with the massive recruitment of fighters from Western Uganda that boosted the NRA from 4,000 fighters to 20,000 (fresh recruits and UNLA captured soldiers being integrated into the Resistance War).
The 4th campaign coincided with the opening of the strategic counter-offensive on the 17th of January, 1986. Our forces, advancing on five axises (routes), swept towards Kampala in the centre and Masindi and Karuma in the West.


The trek
This trek, therefore, is on just a portion of one of the Operations ─ the Kabaamba Operation. This was within the campaign of gun-raising. The Operation started on the 22nd of December, 1985, from Sebuguzi ─ involving 1,500 fighters ─ armed and unarmed. I, personally, oversaw this operation, with Saleh as the Operational Commander of the force. This was the Mobile Brigade comprised of: 1st, 3rd and 5th Battalions, with alot of commandos (unarmed fighters).


The Kabaamba III was aimed at capturing the rifles that Fronasa had handed to the UNLA following the merger after the defeat of Idi Amin in 1979. Twice, we had, unsuccessfully, tried to capture these guns.
On the 20th of February, 1984, we had, successfully, captured the 760 rifles of Masindi and alot of other weapons, boosting the gun level of the NRA from 600 guns to about 1,400. On the 30th of June, 1984, we had attacked Hoima and got another 60 or so rifles.


The reconnaissance had been done smartly by Mugume-Chagga, assisted by an insider, Tindibakyira. I, however, decided to postpone the operation from about November, 1984, to a later date because one of the cadres, Katabarwa, came with Eriya Kategaya and Ivan Koreta, from Nairobi and told me that he had established a peace dialogue with his military college-mate, Kagata Namiti, along with Paulo Muwanga who was the Vice-President of Obote.
I allowed Katabarwa to go to Kampala and also came with a very large force, 1,500 that we had prepared to attack Kabaamba, to Galamba to be near Kampala so that Katabarwa could come back and consult us from nearby. Galamba is only 17 miles from Kampala. We arrived there at the beginning of December, 1984.
We waited for a number of days without either Katabarwa or Kyaligonza, who was the one guiding those who went to or came from Kampala, showing up. Instead, on the 10th of December, 1984, we were attacked by a UNLA force and we repulsed it.


It was there, one morning, that Kyaligonza turned up and told us that Katabarwa had been killed. As we were preparing to leave that area and head for Kabaamba, we were attacked by a large UNLA force. I did not want to continue with a protracted battle for positions where we wasted ammunition without profit.
The column marched through the Masuliita peninsula, in the area of Bbaale and ended in Ssebuguzi, near Kapeeka, as we prepared for the long walk to attack Kabaamba.
The long walk started on the afternoon of the 22nd of December, 1984.
We were always monitoring Obote’s military radio-network and they started saying that a large guerrilla force, led by Museveni in person, is heading for somewhere.


The UPC, in their usual day-dreaming, started saying that we were running away ─ going to Congo, etc. I could, however, not take chances. We arrived at Kyamusisi on the 23rd of December, 1984. We cooked, ate, etc. This time, unlike 1983, we had planned better. We had pre-dumped maize grain and beans at the stop over points: Kyamusisi, etc. Soldiers did not have to carry the grain on the march.
Nevertheless, given the exposure by the daylight march, I decided not to take chances.
I decided to split the force into two. 700 soldiers, all armed, had to march in the nights and attack Kabaamba by a surprise dawn attack as originally planned, while the larger force of 800 fighters, only 40% of them armed, would march in the opposite direction, in daylight hours, to confuse the enemy.


The following day, we marched by day and camped at Kembogo. On the 28th of December, 1984, a force from the UNLA in Bukomero attacked us. We repulsed them. I was now happy that our deception was working.
On the 30th of December, I moved the force to our old site of Kagaari, in Dr. Sebuliba’s farm, where we camped. On New Year’s Day, 1985, the good news came through our usual informer ─ the UNLA radio-operators. A military radio message was sent, I think, from Mubeende, that, that morning a powerful enemy force had attacked Kabaamba barracks, overrun it.


The force from Mubeende had made repeated counter-attacks, but had been repulsed. I immediately, called a Master-Parade of our force of 800 and conveyed the good news to the force.
On 2nd of January, 1985 we moved out of the Lukoola, climbed the Ssingo hills on both sides of Hoima Road and ended up in Kyamusisi.


Besigye saves Museveni
On Bulaga hill, I fainted but Dr. Besigye gave me re-hydration salts and I resumed the march. Earlier on, in Karagwe, Tanzania, I had learnt the strain on the body when climbing hills. It is wise to have rests after short bounds; also use a support stick. On the Bulaga hill, I had not observed those rules.
Eventually, we established radio link with Saleh. After successfully attacking Kabaamba, he had marched West, towards Kyaaka, crossed the Mubende-Fort Portal Road at Kyegyegwa, fought battles with UNLA at Hapuuyo and continued marching and fighting.


By difficult marches, by day and by night, we crossed Hoima-Kakumiro road at Nkoondo and camped at Kasaambya Sub-County Headquarters on the afternoon of the 8th of January, 1985. There, through the usual radio communication, we agreed with Saleh to link up at Bireembo, only 8 miles from Kasaambya Sub-county headquarters.
The link was effected on the 9th of January, 1985. The Kabaamba operation/battle had been almost as successful as the Masindi one. 650 rifles, mortars, machine-guns, ammunition, etc., had been captured. It was another historic victory for the NRA.


Saleh’s force, having marched by night after night, starting with the Christmas day of 1984, had arrived at Kabaamba, on the morning of the first day of the New Year, 1985. Seeing the huge extended-line of the NRA fighters, the UNLA soldiers had fled. The battle was now left to one soldier, who entered the underground armoury of Kabaamba and tried to imitate the heroic action of the Tanzania NCO that had blocked us with machine-gun fire on the 6th of February, 1981.


The landmines
Since I had been in all those efforts, I now designed a medicine for that eventuality. Out of the 100 land-mines we had got from Gaddaffi in 1981, only 4 were now remaining. The 96 landmines had been used to wreak havoc on the UNLA who stupidly insisted on using vehicles that were, really, moving coffins. Since the External Committee had failed to get additional guns out of the chaotic Libyans, we were now remaining with only 4 pieces.
I decided to use one of them for this strategic task of liberating the guns Fronasa had handed in at Kabaamba in the 1979/80 unification of the armed groups. Anticipating the repetition of the Tanzanian Corporal’s actions, I decided to weaponize one of the cattle-keepers techniques.


Get one of the Gaddaffi land-mines, use a car battery to create an electric current, put an electric detonator in the landmine, put the so armed land-mine in the ekiteeko, from the top of the armoury lower the mine to the mouth of the armoury (the opening) and electrically detonate it. It will stun the underground warrior and our group will assault. Apparently, my military field engineering (using explosives), worked even better. The poor fellow died by concussion. I had not anticipated that extreme result.
Therefore, the under-ground armoury was overcome in that way and the weapons were safely got out. The UNLA counter-offensive, now led by Ogole and Odwar, tried to make Saleh drop the guns by incessant attacks.
When we joined with the Salehs below Bireembo Primary School, I did not like their camp-site ─ in the valley – on the banks of Nkusi River. The Bunyoro vegetation at that time was very thick with narrow paths that were like tunnels under the massed and intertwined vegetation.


Shell hits near Museveni’s trench
On the 10th of January, the force moved out of the valley and started camping at the school. However, Ogole and Odwar launched a heavy artillery bombardment and a ground-attack. We repulsed the attacks but the artillery killed 3 of our fighters and injured another two who died later.
Some of the shells hit near my trench. One of my close body-guards, was injured. In the night, however, we successfully pulled out and heading for Nkooko and Ntwetwe.


The False story
We walked the whole day, went through Nkooko in the night and entered Ntwetwe where one of our supporters ─ Kigoongo─had alot of maize grain – belonging to their Cooperative Society. I paid him for the whole maize, but told him to report to the UNLA, when we left, that the guerrillas had locked him up and grabbed his maize.
The deception worked. Our supporters got their payment, we got the grain and the UNLA did not penalize our supporters because they believed the story. The UNLA came on our track towards Nkooko and were aimlessly shelling the forests of the area.


on the 12th of January, we moved out of Ntwetwe, crossed a River called Mpongo and laid a big ambush on Bukwiiri ─ Ntwetwe Road, where we destroyed another UNLA convoy capturing more guns.
Eventually, we crossed Hoima Road at Rwamagaari and re-entered the Lukoola. Ogole and Odwar had lost the battles and the operation. We, eventually, camped at Nyambiindo and re-organized the force creating the battalions that pushed the UPC regime to its evening hours. The battalions, now reinforced with more rifles were:


Therefore, each battalion had 300 rifles. After re-organizing, we marched the whole length of the Lukoola, passed Kansiri, climbed the Luanda hills, above present day Ssingo barracks and entered the Kikandwa forest on the 21st of January, 1985.
While in Kikandwa forest, we were, again, attacked by Erica Odwar, but repulsed him. we moved out of the forest at night with our luggage and started walking along the Kirema-Kabele Bulungi-bwansi Road.
Therefore, the years 1984/5, were years of victory for the NRA. In that year of shame, the NRA, supported by the people, wrote a glorious story of heroism, sacrifice and skill. Victory for the forces of Patriotism and Pan-Africanism in Uganda was drawing near.


The massed UNLA battalions were defeated by the Mobile Brigade, again under Saleh; that marked the end of the Obote regime. The defeated UNLA came to Kampala and overthrew Obote.