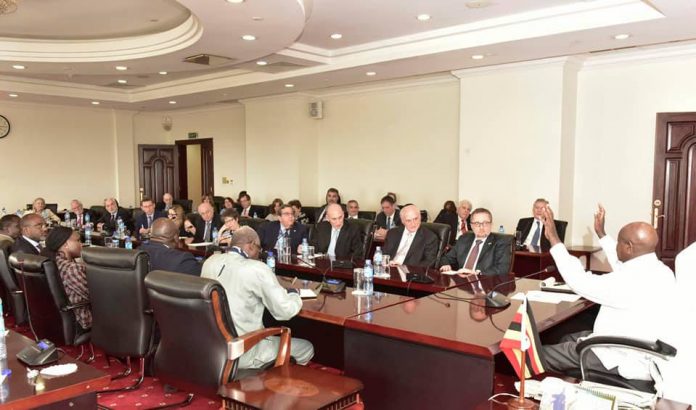 President Museveni, met and held a discussion with a group of representatives from 53 Jewish organizations based in the United States of America.


The delegation, led by Mr. Malcolm Hoenlein, the Executive Chairman of the Conference of Presidents, comprises 53 major Jewish organizations of the Unites States of America established with the aim of strengthening the Israeli–American relations.
Some of the organizations that were represented include: American Friends of Likud, Emunah, Zionist Organization of America, Committee for Accuracy in Middle East Reporting in America, Jewish News Service, among others.


‘‘I told them Uganda’s position on the Middle East is shaped by the Bible, which places both Israel and Palestine in the that part of the world. Therefore, we cannot align with a version of history that excludes either of them.’’ The president said.
He added: Our African civilization, based on symbiotic relations amidst a lot of diversity in tribal practices even within a country’s boundaries like Uganda, is a good model that should be emulated in other parts of the world to enhance peace.

The president also interested the group in investment opportunities in Uganda, emphasizing agro- processing, mineral processing, high level manufacturing and specialized services particularly in medicine and tourism.
“I am a donor to India because my people go there for specialized treatment. I urge you to come and build hospitals for these specialized services,” Mr. Museveni told the visiting team.


Malcolm Hoenlein, said the conference of Presidents of Major American Jewish organizations decided to visit Uganda because it is a good ally and there is a good opportunity for both Uganda and Israel to grow together