Home Lifestyle Museveni: grazing is refreshing exercise, I use this time to come up... 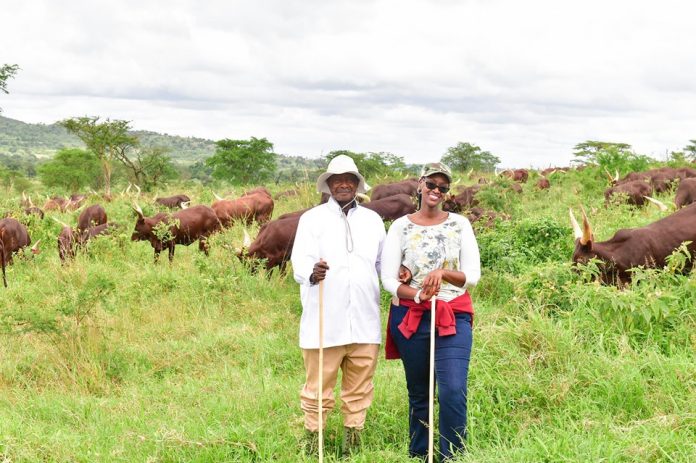 July 2017, the Minister for Kampala Capital City Authority, Beti Kamya had this to say about president Museveni “For the little time I have worked with the president, I find him, a very informed and tolerant leader. I sit in cabinet, but actually I think he is more intelligent than cabinet combined.”


So where is the secret?
The head of state on Friday revealed that he uses grazing as an exercise during which he generates great ideas.
‘ ‘The grazing exercise is refreshing, one uses that time to think and come up with many ideas. That is how our parents came up with a rich language.’’ He said.

Mr. Museveni accompanied by his daughter Diana went grazing at the farm in Kisozi, Gomba District.
‘’I am continuing to breed high-performance Ankole cattle at the farm. We took stock of the cattle and discussed means of getting better yields.’’

read: Museveni: I have not stolen anyone’s land in last 31 years

he called on the youth not to abandon and neglect these practices ‘’ whether you have a garden or cattle, find time and get directly involved. Besides creating wealth, it helps you innovate’’

read: Museveni: Whose money have I stolen? I bought my Land in Rwakitura in 1967, after my A-levels, from my temporary teacher’s salary

The Kisozi ranch sits on about ten square miles, with more than 5,000 head of cattle is located on the border of Sembabule and Gomba districts