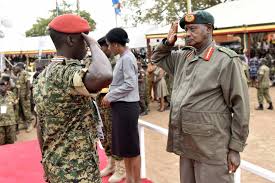 President Museveni has given the Deputy Inspector General of Police, Maj Gen Steven Sabiiti, two days to come up with a plan to combat the increasing cases of burglary and armed robberies.


The president’s directive comes amid reports of increasing incidents of burglary and armed robberies in homes especially in Kampala Metropolitan Police area.
‘‘These are gangs we shall easily defeat. That is what we did with the Kiddawalime gang in Masaka, the gang of Bukomero, the gang of Entebbe etc. ‘’ the president said on Tuesday.

He added: I have given two days to Commander Sabiiti of the Police to come out with a plan to combat these gangs. The IGP is away in Peru for a meeting. I will look at that plan, comment on it and it will, then, be communicated to all of you.


Police reports indicate that Kira, Kasangati, Bwebajja, Wakiso, Lungujja and Kajjansi are some of the areas where high cases of burglaries are reported.
The president said that it is easy to defeat these gangs. ‘ ‘Their crimes will only add to the credit of the NRM because we are going to defeat them. Yet, the People have already seen the bankruptcy and the criminality of these groups and those who back them’’.