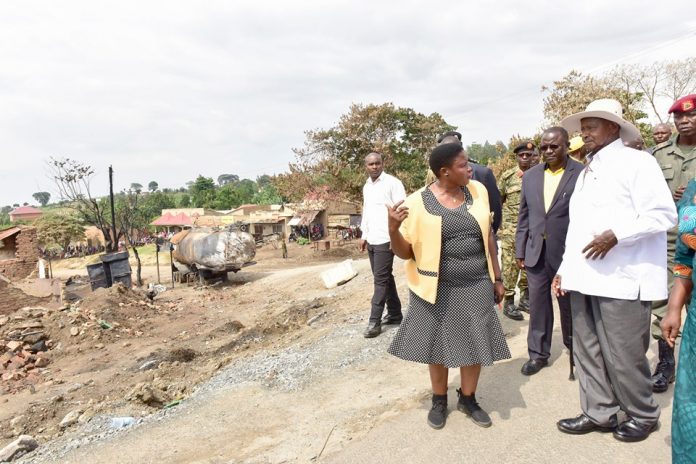 President Yoweri Museveni on Sunday visited the residents of Kyambura parish, Rubirizi district to commiserate with them following the explosion of a fuel tank that burst into flames


On Saturday, 18 August 2019 a fuel, from Eldoret in Kenya heading to Butembo in DR Congo lost control and crashed. 26 people lost their lives, 175 were injured and property worth billions of shillings destroyed.
Condoling with the residents of Rubirizi on Sunday at Kyambura Trading Centre, the Head of state said ‘‘Government will give 5 million shillings as condolences to each family that lost someone, and 1 million shillings to those who sustained injuries and are in hospital. Support will also be provided specifically to the businesses and houses that were lost.’’

speaking to the bereaved residents of the area at Kyambura Primary School playground in Kicwamba Sub-County in Rubirizi District the president said government will also ensure that a report is issued so that owners of the fuel tanker truck compensate the families and their property that were destroyed by the fire.
While expressing his sympathies to locals, the president asked the public to support government in fighting bad driving.


He added that information that has been obtained indicate that the vehicle was faulty, and asked police to pursue the owner (s) of the tanker, whose wreckage is still at the scene of the accident, to know whether it had comprehensive insurance so as to compensate for the loss.
“Compensation for loss of lives and property is supposed to be made by the owner of the company (that owned the tanker). You (leaders) are speaking as if the story ends there, it’s not like that. If a vehicle kills people and destroys property out of negligence of the owner/driver you owner compensate,” he said.


‘’If we find that they have been allowed to drive vehicles in Uganda without comprehensive insurance, it will be police to blame,” Museveni emphasized adding that if a vehicle kills a person or destroys property, the owner has to pay for the loss.