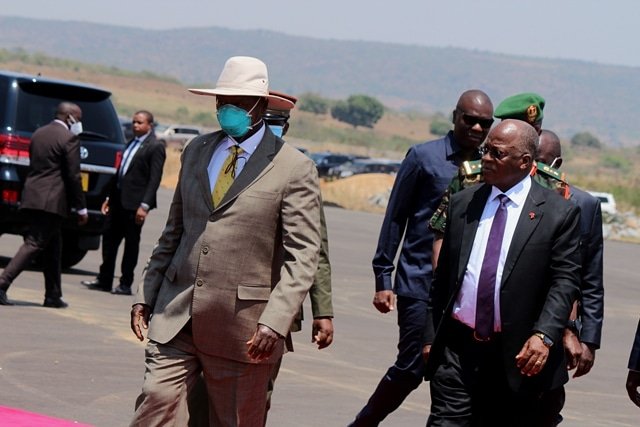 After addressing the audience unmasked, President Museveni promptly reaches for his mask and heads for his plane. He also wished CCM and President Magufuli victory in the forthcoming election. Tanzania goes to polls next month

‘‘They were tough, I taught them well’’ he added.

70% of pipeline will be in Tanzania ad 30% in Uganda. The two heads of state reportedly agreed on 60:40 split.

‘‘Really interesting to see President Museveni in Chato, Geita, Tanzania to meet President
magufuli Masked. No handshake. Not even with his host. No one on the Tanzanian side is masked. Everyone on the Ugandan side was’’ tweeted journalist Alan Kasujja


‘’Today’s meeting of Magufuli and Museveni serves as a graphic illustration of East Africa’s democracy deficit. They can compare notes on destroying the hopes wishes and freedoms of their people!’’ Tweeted Robert Amsterdam