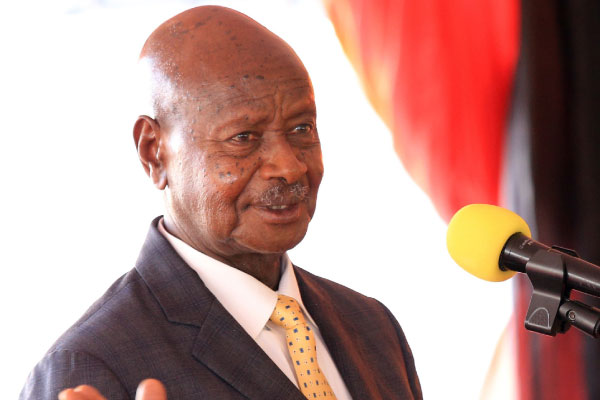 “I am always fit but the doctors pointed out the mistakes and then I decided to shed off,” President Yoweri Museveni told the BBC
The 75-year-old leader said he had not been watching his weight, which had gone up to 106kg.


He denied comments on social media that he “looked tired”, saying that he had deliberately shed some fat.
Last month, the president said he “had allowed fat to accumulate in his body frame because the doctors had not explained to us clearly the mistake of not fighting fat”.

He added that his current weight of 76kg was suitable for his 5ft 7in height.
“I eat some cassava, because I don’t eat your European food and your Asian foods. I eat our food; which is cassava, some bananas, millets and our vegetables,” Mr Museveni told BBC’s Alan Kasujja.


“So I normally eat a little bit of that in the morning. Then no lunch, I just drink water and coffee without sugar because it’s very bad – sugar is not good,” he said.
“Then at around seven [in the evening] I eat two Irish potatoes because they have got low starch, and a lot of vegetables to deceive the stomach that I am putting there something when in fact it’s just the roughage,” he added.


In 2015, Mr. Museveni said that then US President Barack Obama told him during a meeting in Ethiopia that he looked young.
“I forgot to tell him that it’s because I eat Ugandan grown foods,” Mr Museveni said.
He has advised Ugandans several times to shun Western foods for local ones, which are, according to him, healthier and also stave off diseases.


April last year, President Museveni boasted of living a disciplined lifestyle ever since he came to power 33 years ago, cautioning the UPDF soldiers for whom he is commander-in-chief, to live a disciplined lifestyle. Museveni made the revelation on April 6 as he visited Uganda People’s Defence Forces (UPDF) division headquarters in Mbarara.


December 2017, the head of state said: “I have been here for the last 30 years and all this time you have never heard that Museveni is sick and is in hospital. I do not have time for sickness’’