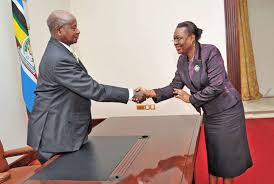 In exercise of the powers vested in the president by the 1995 Constitution of the republic of Uganda and on advice of the Judicial Service Commission, the president Museveni has appointed Justice Irene Mulyagonja to the court of Appeal.


Also appointed to the court of appeal are; Monica Kalyegira and Kibeedi Muzamiru.
In the same appointment, Museveni 12 candidates to the High Court, who include among others; Odoki Phillip, Esther Nambayo, Boniface Wamala, Jane Okuo, and Jeanne Rwakakoko.
President Museveni has in the recent past expressed his displeasure over the performance of the Inspectorate of Government headed by once his Once blue-eyed girl Irene Mulyagonja.

During the 9th Commonwealth Regional Conference for Heads of Anti-Corruption Agencies in Africa last week Museveni said he didn’t appoint Edith Col. Nakalema, the head of State House anti Corruption Unit to fight Mulyagonja but rather help her fight corruption where she had failed.
Museveni said State House ant-corruption team led by Lt. Col. Nakalema is not meant to takeaway the work of the IGG or make it useless, “I appointed it to complement the IGG.”


Adding “When people start complaining of a watchman, then you have to hire a watchman to watch over that watchman and that is why I started and setup units in presidents office to watch over the IGG”.
“Corruption is ideological it takes hard work to fight but our people are doing it. You can’t stay in a society where you steal funds and become the only one who is wealthy, living a good life on behalf of others (prosperity for the few) is very dangerous.” He said


Adding “The prosperity for the few in a society of the deprived cannot be sustainable, Emphasis should be put on attaining the betterment of society in the fight against vice. Many of the people in the 3rd world fear to stay in the 3rd world, when they steal money here, they take it to the first world where they feel it’s safer.” He said


Ms. Irene Mulyagonja Kakooza, was born in 1963. She did both her ‘O’ and A-level education in Mt. St. Mary’s Namagunga before joining Makerere University where she studied Law. She later did her Masters in Zimbabwe. She worked with Mulira & Company Advocates before moving to her own firm. Married to Mr JB Kakooza, the mother of three was appointed judge of the High Court fours years ago. She becomes the fourth IGG since 1986.