Home Business Museveni: Coronavirus has given us a rude awakening ‘‘I’m going to start... 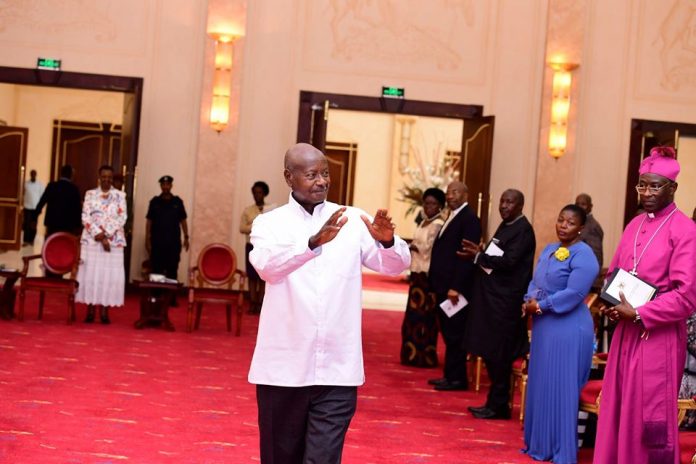 President Yoweri Museveni on Saturday different religious leaders in intercession for the country over the coronavirus pandemic.
‘ ‘The idea of these national prayers came from religious leaders. I have heard people praising me for it.’’ The president said in his speech


He added: My only contribution is that I accepted it because from my experience, prayer has always worked even in the past, according to scripture.
‘ ‘I believe in God because of my experience, I believe that there is God and I have given that testimony even in the books I have written. I have seen in my life that there are things not done by me, but another power- God. ‘’ he said
“The fact that there is no case yet in Uganda given their careless life, it must be because of God because they have been traveling and they like to travel…. they would have brought this disease but God must be intervening,” Museveni said.

The President also listed a number of interventions he believes God has made to save Uganda lately, including the recent locust invasion from Kenya.
These devastating insects Museveni declared, had been neutralized over the past weeks and that they did no harm to Uganda’s vegetation.


“Prayer is already working. The locusts came but they ate nothing.They had already eaten a lot of things in Kenya and Somalia and when they came to Uganda, they came to lay eggs. They were just sitting in trees.”
Mr. Museveni asked Ugandans not to abandon other measures issued by the ministry of Health.
‘ ‘I am glad we are praying, but even as we pray, we must also continue doing as much to battle coronavirus. God created us in his own image and gave us the power to establish dominion over nature. Eventually, we shall defeat COVID-19.’’ He said


The president said that he never believes in pessimism, but he looks at finding solutions
‘‘Yes we shall have problems in the economy, tourism, night clubs, bars will suffer but other aspects of the economy will thrive’’ he remarked


A rude awakening
Gen Museveni told religious leaders and other dignitaries that the epidemic has given us ‘rude awakening’’
‘ ‘COVID-19 has brought with it challenges, but most importantly it has given us a rude awakening. For instance, we have been spending $7b importing things from China. The government is going to invest in those who can manufacture things here.’’