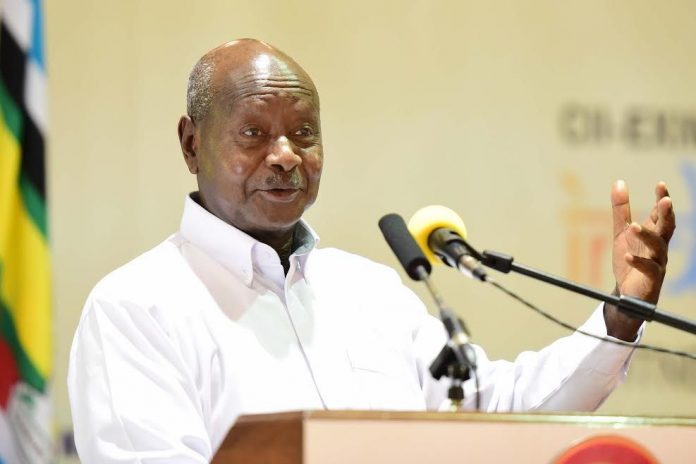 President Yoweri Museveni has assured Ugandans of criminal free Uganda sooner than later.
‘‘Otherwise using the still incomplete technology of the cameras and other methods, the suspected criminals [in recent murders] have been arrested and presented to the Courts’’ the president revealed on Tuesday.


‘‘Eventually, the criminals will be captured. Up to the killing of Kaweesi, Kiggundu and Abiriga,’’ the president assured Ugandans
Andrew Felix Kaweesi was gunned down on 27 March 2017, Sheik Maj. Mohammed Kiggundu was assassinated on 26th November 2016. While Ibrahim Abiriga was shot dead near his home in Kawanda along the Kampala-Gulu highway. In all these cases vowed to find the killers.

The president says in all these cases the security infrastructure had lagged behind.
He explained that since the killings of high profile Ugandans, he presented to Parliament a 10 points anti-crime plan on the 20th of June 2018. ‘‘Although we have only partially implemented it, many of the killers in recent times have been arrested. The Masaka gang of Kiddawalime was wiped out, Serugo Paul and his Syndicate in Masaka, Kanyesigye Juilius alias Mwesigye Amon in Rwizi and Kampala and the Usafi mosque criminal syndicate were neutralized.’’
The Head of state says the killers of Nagirinya have all been arrested, including the red-jacketted character that was driving Nagirinya’s car after killing her.


‘‘With better technology, like what we are acquiring, identification becomes easy. In the USA, as you normally hear, there are mass shootings every other week. However, identification is always fast. That is where we are heading.’’ The president assured.
He blamed the recent murders on negligence by the Police


Mr. Museveni says the planned electronic registration of all vehicles and motorcycles in Uganda will aid electronic tracking every vehicle will further tighten the rope around the neck of criminals.
We need to work on the courts

Mr. Museveni also talked about the need to work on the courts. ‘ ‘ They [ the courts] need to move quickly on the cases of murder, rape and terrorism, the big backlog of cases notwithstanding.
He called on the Political leaders must harmonize with the Courts on the issue of the fundamental concept of Justice.
‘‘The NRM concept, for most of the time, is an eye for an eye; a tooth for a tooth. It is only in politics where we adopted reconciliation as a strategy.’’ He said.


He however says, Part of the reason for being soft in reconciliation is that ‘‘we had already punished our opponents seriously in war. It is, therefore, not correct to say that those mistake- makers were not punished. They were punished in the conflict. With peace, it was in the national interest to reconcile.’’
‘‘This is totally different from the phenomenon of Civilian Courts condoning, aiding and abetting crime by, contrary to the wishes of the country, exonerating criminals. This is promoting impunity.’’ He emphasized