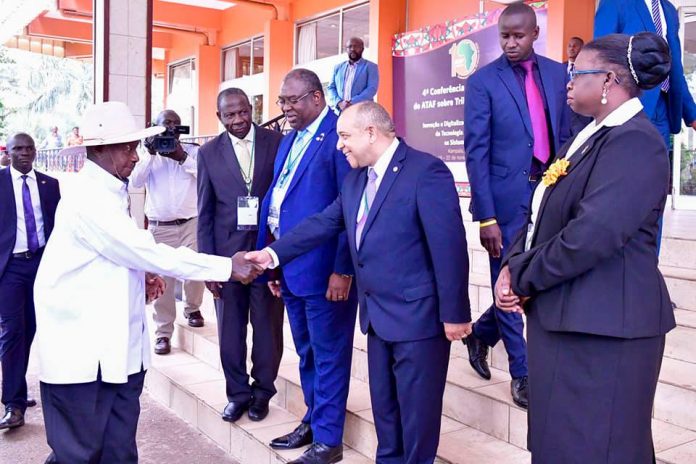 
“Someone is selling mangoes, roasting meat or gonja and the authorities want to tax them! Let these people earn some money and put it in their pockets. I know Ugandans very well. When they earn they go to a bar and will indirectly pay taxes from the beer they drink,” he said.

The President was opening the 4th African Tax Administration Forum (ATAF) International Conference on tax in Africa at Kampala Serena Hotel.
The 4-day (ATAF) conference is running under the theme “Innovation-Digitalization and Harnessing Technology to Improve Tax Systems and has attracted participants from 37 African countries and 11 from outside the continent.
The forum that is also running concurrently with its 10th anniversary since inception in 2009 in Kampala, aims at exploring ways and means of improving the efficiency and effectiveness of mobilization of tax collection in Africa. The conference further aims at looking for ways of optimizing revenue collections, minimizing human mistakes like corruption and building capacity in revenue collection.


President Museveni, who congratulated ATAF for the 10 years of existence, noted that taxing small-scale businesses was a big mistake adding that only some kind of consumption, especially the luxury type, could be taxed. He also advised the tax body to digitally map all properties in towns to ascertain those that are for rent and private ones for easy tax assessment.
He welcomed the move to instal cameras in factories to monitor production lines of beer for quality and numbers adding that there was a lot of tax evasion in the country.


“That was a big leakage in terms of numbers and value. In Uganda there was a lot of tax evasion,” he noted.
He said the same also applies to imports, which should be monitored from the factories of manufacture and should bear the stamps of those industries.
President Museveni also raised his concern about inadequate scanning of cargo by the Uganda Revenue Authority at border entry points urging the tax body to do more in that area. He urged URA to reform the integrity of its staff when recruiting staff.


‘’ those charged with collecting taxes must be people of integrity. It is not enough to employ people with degrees, they must be people you can trust, people of impeccable integrity.’’ Said.
The President urged participants of the Forum to look into the imposition of taxes on goods that were imported on zero tax like machinery for production or medicine once their production is started in a country.
The Minister of Finance and Economic Planning, Hon. Matia Kasaija, noted that Uganda Revenue Authority had made some strides in the area of digitalization and the harnessing of technology for the improvement of the tax systems.


The Chairman of ATAF Council and Executive Chairman of the Federal Revenue Service in Nigeria, Mr. Tunde Fowler, thanked President Museveni for believing in the vision of ATAF adding that Africa can solve its own problems.
ATAF Executive Secretary, Mr. Logan Wort, pointed out that Uganda stands out in the growth of revenue and the digitalization of the system.
The Commissioner General of Uganda Revenue Authority, Ms Doris Akol, outlined some successes and challenges the Authority is facing which, among others, include taking money out of the country digitally in most cases evading taxes.