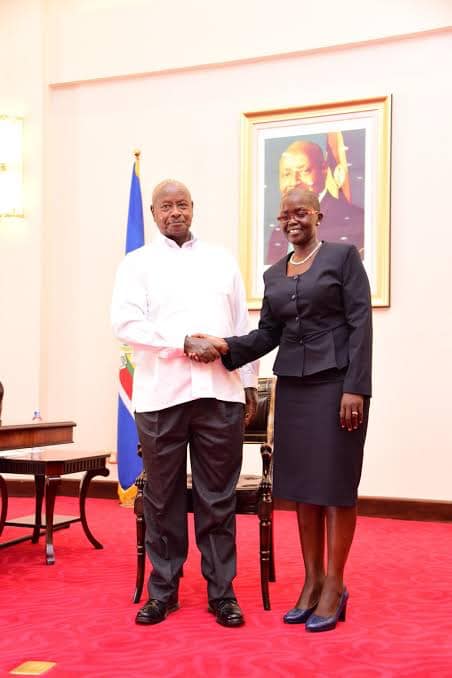 President Yoweri Museveni has appointed high court justice Jane Frances Abodo as the new Director of Public Prosecution.
She is taking over from justice Mike Chibita who has been serving as the DPP since 2013
Abodo who hails from Karamoja sub region, one of the most remote regions of Uganda, Abodo is the ninth among 62 siblings.


The office of the Clerk to Parliament, has since scheduled for the interaction of the new DPP with the MPs on Appointments Committee on April 6, 2020 at 11:30am.
She was appointed judge in February 2018 and posted to the Criminal Division of the High Court where she has been until her new appointment. The most prominent case she has handled is the prosecution of Troy Wamala in the murder of singer Moze Radio.

Justice Abodo was appointed judge in February 2018 and posted to the Criminal Division of the High Court where she has been until her new appointment.
Before her appointment as High Court judge, Abodo was Senior Assistant DPP and headed the Anticorruption desk of the DPP.


She was also the focal person for Plea Bargaining. Prior to joining the bench, she was a state prosecutor specialising in white collar and cybercrime.
She holds a Master of Laws from Trinity College Dublin (2016).


In 2015, Abodo was recognized by the Uganda Law Society (ULS) as the best prosecutor of the year. Her office boasted of the highest conviction rates in Uganda.
While at the office of the DPP, for eight years, she headed prosecution arm of the Anti-Corruption Court.
Over time while in the office of the DPP, Ms Abodo grew in ranks. She started as a pupil state attorney before moving to senior state attorney, principal then attorney principal to senior assistant DPP.