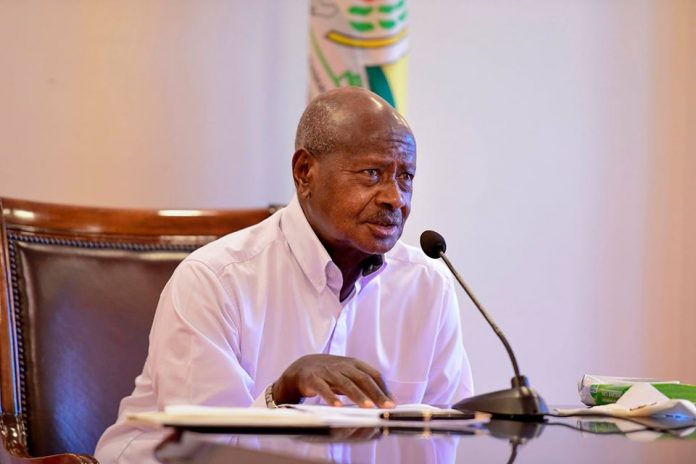 Following the advice of scientists, President Museveni In a televised addresses on Tuesday announced several measures that eased the lockdown which he announced early this year, to control the spread of coronavirus.
Among the measures; the president extended the curfew to start at 9pm and end at 5:30am.
Mr. Museveni said that he was worried about boda bodas but he has been reassured by the Health minister that there’s a solution


He allowed boda boda riders to start carrying passengers on July 27, provided the riders wear face masks and helmets.
The head of state also said passengers, must wear face masks.
He said that boda boda operators will be required to keep a record of passengers they transport to enable health workers trace them in case a rider tested positive for COVID-19.
‘’Riders will not be allowed to operate beyond 6pm because they were being used by criminals.’’ He said
The president while addressing the nation about COVID-19 on Tuesday evening at State House Nakasero, permitted 110 arcades to reopen on condition that: they have temperature guns, observe social distancing, have no people congested in corridors, no traders on the verandas and have a book record to record every individual who purchases any product from the arcade.

“Why do we do this? In case you, the shop fellow gets sick, we need to know how many people you have interacted with so that we can follow them up,” he said.
There are 230 arcades in Kampala. The other arcades will have to fulfill the requirements before reopening
Mr Museveni also allowed salons to start operating with immediate effect.
“We’re going to open the salons provided they provide face shields for their staff, check temperature of clients, observe social distancing, no air conditioning and partitioning of parts of the salon in the cities, plus handwashing,” he said.
Entebbe airport
Mr. Museveni said that Entebbe International Airport will remain closed until the COVID-19 situation in other countries improves.


He added: I do not want to declare a dead-year yet because a lot of scientists are working on the vaccine and it may come sooner than later. Let us give it a month and focus on distance learning.
He said government can’t ignore the suffering of private schools. He promised government will study and discuss if their loans can be taken over by Uganda Development Bank as well as suspend NSSF contributions.