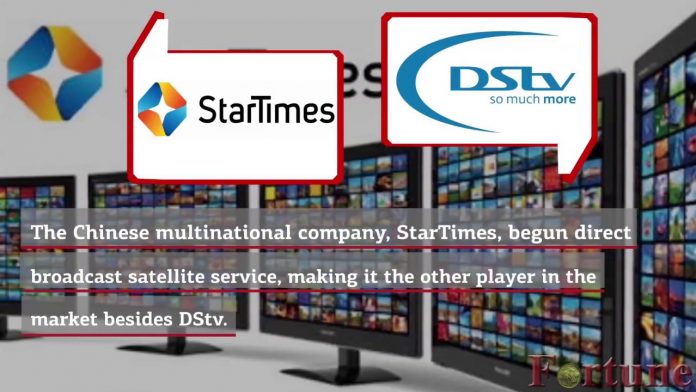 
The company’s move is seen as its latest bid to protect its customer base in the face of increasing competition.
Recently, Aldrine Nsubuga, the StarTimes, vice president for marketing, said ‘ ‘At the turn of 2017, we had about 800,000 subscribers but by close of 2018, we had hit 1.5 m subscribers with over 1.3m active subscribers,”
Pay Television (TV) subscribers in Uganda increased from 1.4 million to 2.1 million, according to a latest report compiled by Uganda Communications Commission.


Stiff competition
DStv’s latest price cuts also point to s changing pay-TV landscape, where subscribers are increasingly turning to on-demand streaming content online.
In Kampala and surrounding areas where internet data speeds are reasonable have switched to online streaming and TV on demand services like Netflix or ShowMAX. Unlike DStv, big streaming companies like Netflix have invested in original movie content that keeps its users globally subscribed. There’s clearly a dwindling push factor for subscribers to renew their packages.


Across in Kenya , Dstv is also having tough times. Multichoice-linked Video-on-demand company Showmax has been banking on exclusive local content to ward off competition in the Kenyan market by its biggest rival Netflix.
Showmax is owned by Naspers — which is also behind pay-TV company MultiChoice.
Using devices such as Android-based TV boxes — which connect to the Internet, customers have been illegally streaming content such as the English Premier League, eating into MultiChoice Kenya’s dominance locally.


DStv Uganda recently partnered with MTN Uganda to introduce internet bundles that subscribers can utilize to easily stream TV live via the DStv Now application. These new bundles were cheap and were also tired to existing premium to Access subscribers at an affordable price. Startimes started this product a few years ago.
Startimes has also had customized products while Dstv and GoTv went for one size fits all.