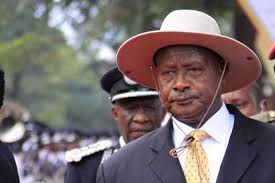 ‘‘Robert Gabriel Mugabe’s legacy is dogged with approval and controversy in equal measure. Just like many African dictators, he over stayed his welcome and presided over a government that violated human rights and suffocated political space in Zimbabwe.’’ Says Henry K. Otafiire


He adds: Using anti- imperialism rhetory, he was able to buy more time and hang on without any indication of quitting until he was deposed in a coup de tat.
Mugabe died on Friday in Singapore aged 95.

African leaders pay tribute to Mugabe
African leaders past and present have been paying tribute to Robert Mugabe, whose 37-year-rule in Zimbabwe made him one of the continent’s longest-serving leaders.
“A great nationalist” and “symbol of Zimbabwe’s emancipation” is how Nigeria’s former President Goodluck Jonathan described him:


“I learnt this morning about the passing of an African liberation icon and great Pan-Africanist, His Excellency Robert Mugabe. I join His Excellency Emmerson Mnangagwa, the people of Zimbabwe and the entire African continent in mourning the demise of this great son of Africa. May his soul rest in peace”, President Museveni said of the late Robert Mugabe.


Nigeria’s current president Muhammadu Buhari, meanwhile, said Robert Mugabe was “a man who lived most of his life in public service”.
In Kenya, the flag is to be flown at half-mast on all public buildings, military posts and naval centres from Saturday until sunset on Monday. President Kenyatta called Mr Mugabe “a freedom fighter and a pan-Africanist who played a major role in shaping the interests of the African continent”.


Tanzania’s President John Magufuli tweeted in Swahili: “Africa has lost one of its courageous leaders, who resisted colonisation through actions.
“Worthy son of Africa,” is how the former President of the Democratic Republic of Congo, Joseph Kabila, described Mr Mugabe.
In 1998, Mr Mugabe sent troops to back Mr Kabila’s father, Laurent, who was trying to repel rebel forces backed by Rwanda and Uganda.


Zambia’s President Edgar Lungu said Mr Mugabe will be remembered for “fearlessly defending the continent”, adding that his place in the annals of history was assured.
Prize-winning author Novuyo Rosa Tshuma, who fled Zimbabwe with her family in 2008, says the death of former leader Robert Mugabe has come as a relief.
“I will not lie – my family is rejoicing. Many of my friends, many people I know are rejoicing at Mugabe’s death, even if it’s not a consolation,” she told the BBC.


She is perhaps best known for her novel House of Stone – which centres on a character who is a product of rape during the Gukurahundi massacres of the 1980s, in which thousands of people seen as opposing Mugabe were killed.
“After what we’ve gone through – and the many of us who have had to leave – it’s sorrow but it’s also a feeling of relief,” Tshuma told the BBC.


HARARE RESIDENT ONWELL SAMUKANYA
“He was an icon, he was an African legend. His only mistake was that he overstayed in power. You can’t have somebody that’s 89 and 90 still being the president, you have to give others a chance.”
Chinese Foreign ministry spokesman Geng Shuang
Geng said Mugabe was an outstanding liberation movement leader and statesman for Zimbabwe who had defended his country’s independence, opposed foreign interference and promoted good cooperation with China.
Accorded national hero status


Zimbabwe’s President Emmerson Mnangagwa, who was once Robert Mugabe’s mentee before the pair became bitter political rivals, has given a statement in Harare.
“He has imparted to our nation a lasting lesson in devotion, love and care. We join here in grief, loss and bereavement.The Zanu-PF party has met and we have accorded him national hero status, which he richly deserves.
“We declare days of mourning until he is buried.”