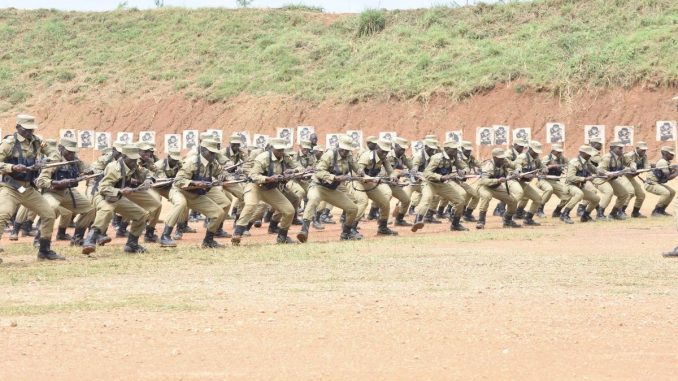 Members of Parliament are concerned about the irregularities in the recently concluded Uganda Police recruitment around the country. With Allegations of recruits who are not residents of some areas. Several MPs complained that locals were not recruited in favour of non residents. Bunya County South MP Robert Ntende told parliament that out of 68 people recruited from Mayunge district, only 24 were from this district
Early this week, Uganda Police Force announced that it had finalized scrutinizing recently recruited 4,500 probation police constables and 500 learner assistant inspectors of police


The leader of opposition in parliament Hon. Betty Aol Ocan called for equitable distribution of jobs in the force and take cognizance of gender equity
In response, the Prime Minister Ruhakana Rugunda , called on the House not hijack the role of recruitment from the Uganda Police ‘ ‘but ensure that things are going correctly. I think it has been a one sided affair and we should hear from the Ministry of Internal Affairs.’’
He added: Anybody who has been wrongly recruited must get out and the recruitment must have a national character. Colleagues should not get worried about reporting.

Kadaga wants Minister to respond
‘‘The voices here are voices of discontent. I have not heard anyone say there was no problem in their area. I don’t think we should allow impunity & endorse it. This exercise should stop until the minister of Internal Affairs reports to us with the entire list. ‘’ the Speaker Rebecca Kadaga said.


Fred Enanga, the Police Spokesperson revealed early this week that Police’s Police Advisory Committee chaired by Inspector General of Police – IGP Martin Ochola, perused through the names of candidates and lists of successful ones have been sent to various regional and division recruitment centres.
Successful candidates will travel to Police Training School – PTS at Kabalye in Masindi District this Saturday when their 12 months intensive training will be commencing.


In July, Police force announced the recruitment of 4500 PPCs and 500 AIP but upon concluding the recruitment exercise, it was realized that more than 2000 PPCs and 200 AIPs applicants were exceeding the maxim age of 22 and 25 respectively.
IGP Ochola for fear of being questioned, he ordered for fresh recruitment to cover the remaining positions but with adjustments in age. Maximum age for PPCs and AIPs was elevated from 22 to 25 and 25 to 28 respectively.