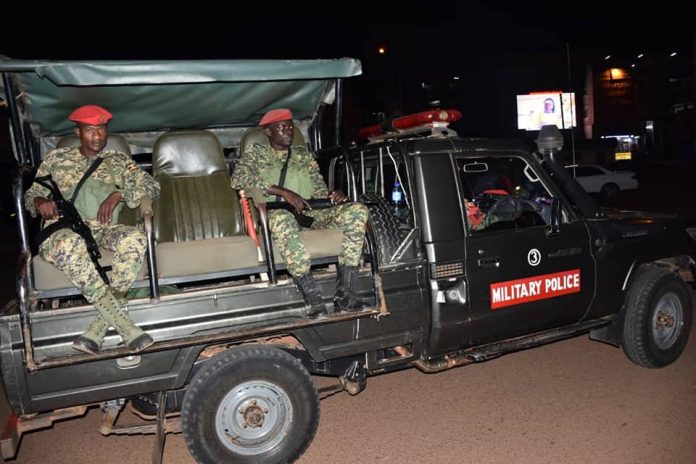 
The CDF directed that on spot interventions to deter and extract for punishment those found in breach of the rules of engagement is done on a daily basis.
The directives came as a result of various social media footage and photographs that showed some Local Defence Forces, UPF and UPDF whipping civilians.

The torture incidents raised an uproar from members of the public catching the attention of the President and the Army leadership prompting drastic measures against all forces enforcing compliance.
As a deterrent measure, UPDF has deployed Military police night patrols against members of the security who go against the set Standard Operating Procedures (SOPs).


In this case, motorized military police is conducting on spot checks on the forces throughout the night to ensure forces operate with discipline without violating the rights of the general public.
Last night Monday 6th April 2020 a convoy of military police and police patrol vehicles was seen conducting snap checks on different sections of patrolling forces in areas of Wandegeya, Makerere, Mulago, Kalerwe, Bwaise, Kawempe and Kagoma. Also snap checks were conducted in Kabalagala, Bunga, Ggaba and Kibuye.


The Deputy Defence spokesperson Lt Col Deo Akiiki called on all the enforcing forces to remain disciplined so as not to spoil the otherwise good job the forces are doing for the country.”Our hard earned good relationship with wainainchi must remain intact as we implement this noble task, no short cut,” Lt Col Deo Akiiki emphasized.
Meanwhile, The 4th Infantry Division Court Martial in Gulu District has sentenced the six UPDF soldiers to six months in jail after pleading guilty to all counts related to assault and causing bodily harm to several people in Amuru district recently.